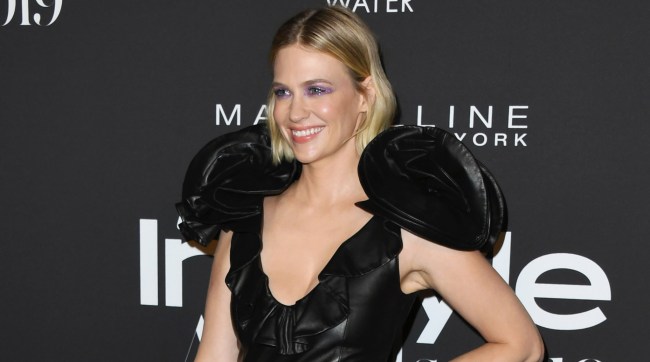 Being rich and famous comes with a load of perks, of that there is no doubt, but it also comes with a few pitfalls as former Mad Men star January Jones revealed this week.

One of those pitfalls is the fact that publications and websites will write stories about you that may or may not be true.

For example, Jones was contacted this week by someone at the National Enquirer asking to her to comment on a story they were getting ready to publish regarding her “desparate bikini pictures.”

“To Whom It May Concern: The National Enquirer is preparing to publish a story which reports January Jones has worried friends with her series of attention-grabbing bikini pictures and social media posts,” the email to Jones read. “Sources claim her content smacks of a ‘desperate cry for attention’ and note how her acting work appears to have dried up before the pandemic took hold.”

Rather than stew about it, Jones, as you can see, shared with her one million-plus Instagram followers with the caption, “S–t. They’ve discovered my secret. Consider this my public apology to my ‘friends.'”

Comments from some of her famous “friends” turned out to be pretty comical as well.

While Diplo was more direct, writing, “You are hot.” Jones then replied, “@diplo don’t feed the monster.”

Then she… fed the monster with yet another bikini picture, with a bonus middle finger thrown in, the she captioned, “Had to do it. #DESPERATE.”

Jones’ famous friend Kate Bosworth, who obviously isn’t worried about her being desparate, pretty much summed it all up after seeing Jones’ latest bikini pic, commenting, “I fckn love you 😂😂😂.”