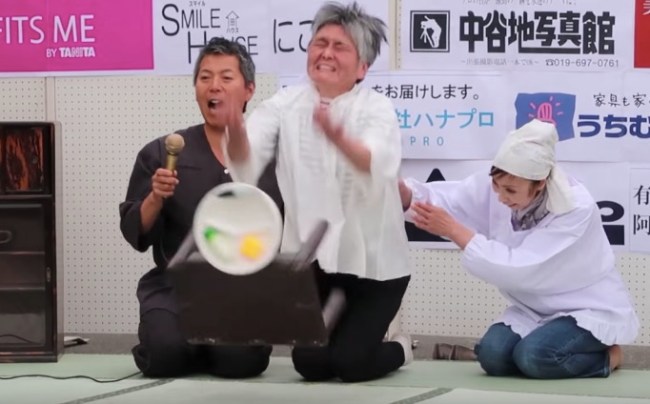 I’m a pretty big fan of weird sports. I’m not so much into playing them myself, but I respect that they exist and people pour a lot of time into doing things like chasing a wheel of cheese down a mountain, risking serious injury along the way. Or that they show up year after year to flip over a tiny Japanese tea table in an organized competition.

I’ve never heard of Japan‘s 12th Angry Tea Table Flipping Contest until this morning and already I love everything about it. The 12th World Chabudai-Gaeshi Tournament was actually held back on June 12th but I came across some videos earlier this morning on Hot Clicks. The format goes like this: entrants must scream a phrase of anger, hope, frustration, or passion while flipping over the tiny table and sending it flying. It begins when an elderly woman sits down next to them and places a hand on the contestant’s shoulder and asks them to ‘stop’. That’s the cue to scream and flip. Participants in the contest can pretty much scream whatever their heart desires. It’s an immediate stress release.

While the table is full of several items, the contestant’s goal is to send the fish flying as far as possible. Contestants are judged based on how far the fish flies as well as overall performance. Here are some highlights from this year’s 12th Angry Tea Table Flipping Contest:

For more on the history of the angry table flipping contest, you can click here to visit SoraNews24.com.