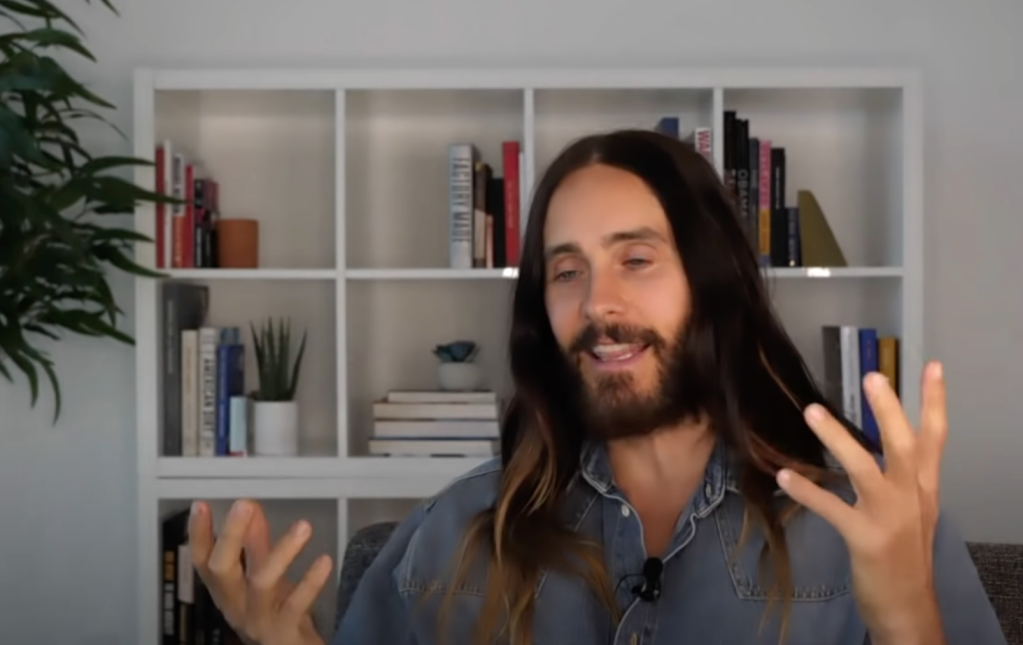 Jared Leto is an interesting guy, I think. At the very least, he puts off the vibe that he’s an interesting guy and the type of person that seems just as comfortable eating peyote in a yurt in Joshua Tree as he is dressing up for The Met Ball Gala and rubbing elbows with the most famous people on the planet.

I’ve never formally met him but I did have to ask him to get off my stoop once. I was coming home from the bar and Jared Leto owas sitting on the steps in front of my apartment in SoHo doing an impromptu photo shoot with Terry Richardson. It was one of those strange New York moments where it was like ‘hey, famous guy, can you scooch a little off my dirty steps so I can get into my tiny apartment while you head back to your multi-million dollar penthouse?’

Anyway, I think a lot of you heard about this but Jared Leto literally had no idea the world had shut down because he was at a 2-week silent meditation retreat and the instructors kept him in the bubble. I’m not here to question the decision of the teachers who were like ‘this guy has an estimated net worth of $90 million so we should just not tell him about the global threat that just shut down everything on the planet’ but it’s a dubious decision to say the least.

As a guest on The Tonight Show starring Jimmy Fallon this week, Jared shared his story on what it was like to emerge from 2 weeks of silence and zero contact with the world to discover that life as he knew it was over. I’ve got his quotes underneath the video below and he starts to talk about it around the 2:15 mark:

Here’s what he had to say if you’d rather read than watch:

“It’s like a two week, roughly two week silent meditation. The idea is that you go away, get rid of your phone, you get rid of distractions, and everything and you just meditate.

And when I went away, there were about 150 cases and just in that short amount of time when I came out there was a shutdown, a state of emergency, the whole world had changed. But when we were in there they didn’t tell us. So we didn’t have our phones, there was no talking of course, no eye contact, no TV. And the teachers, they made a decision of ‘let’s not disturb the participants’ and I didn’t turn on my phone until I went back to LA.

So I drove the whole way, you know, trying to be like peaceful and Zen and keep the feeling going. I got back and I was kind of shocked like Rip Van Winkle.

It was shocking. I had this kind of great tool to deal with like stress and things in life but I don’t think anything could quite prepare any of us for what we all went through in the beginning.

It was like coming out to the zombie apocalypse.

Here’s his Instagram post from last March where he first told the world that he literally had no idea what had been happening and nobody was sure if he was trolling or not until they realized celebrities truly live in a bubble sometimes.

If you’re wondering what Jared Leto’s been up to lately, he’s been showing off his North Face x Gucci collection just as you’d expect him to.

A 12-day silent retreat sounds like physical and metaphorical torture to me. There’s simply too much happening at every moment to try and bottle it all up for almost two weeks and be stuck in silence with my own thoughts. So respect to him for being able to pull that off.