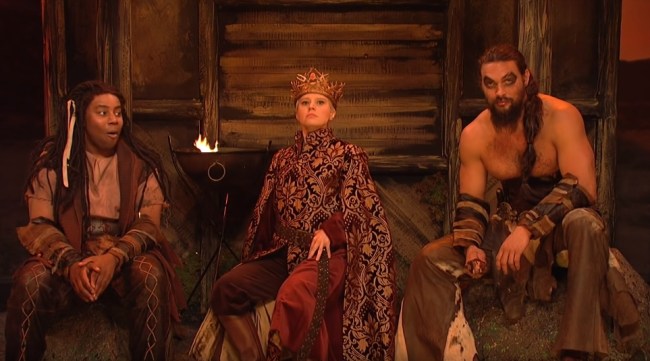 Jason Momoa hosted Saturday Night Live this week and returned to the TV show that kickstarted his career (No, not Baywatch)… Game of Thrones. The Aquaman star reprised his character Khal Drogo for an SNL skit that also ressurected other dead Game of Thrones players. Game of Thrones spoilers ahead.

Kenan Thompson hosted a show titled Khal Drogo’s Ghost Dojo on Dothraki Public Access television and his guest was the ghost of Khal Drogo. Other dead characters reincarnated are Joffrey “Cash Me Outside” Baratheon, Olenna Tyrell, the High Sparrow, Hodor, as well as Brienne Of Tarth who is not dead… yet. There’s even a commercial for “Khal On A Wall,” a Dothrake take on Elf On A Shelf.

But Jason wasn’t done playing ghosts on SNL. He was also a ghost of Christmas extraness in an unusual intrepation of Charles Dickens’ classic A Christmas Carol.

Momoa’s best SNL sketch was “GE Big Boys,” a fake commercial for a line of home appliances made for manly men who just so happen to be stay-at-home dads and I want to buy all of these gas-powered appliances, especially the 240-horsepower ride-on vacuum cleaner.

Saturday Night Live also parodied the 1984 comedy Revenge of the Nerds, but instead of the rage-fueled character of Ogre who despises nerds, Momoa plays Beef, a rage-fueled fraternity brother who despises dorks so much that he only wants to inflict physical harm and death on dorks.

SNL kept with the Christmas theme in many of the sketches this week including this one where a new boyfriend wants to desperately impress his girlfriend’s parents.

This skit based on Elf on a Shelf goes to a weird place quickly.

Back to Jason’s first taste of celebrity when he starred as Jason Ioane in Baywatch in the early from 1999 to 2001.

The musical guest this week was Mumford & Sons, who performed their new hit song Guiding Light.