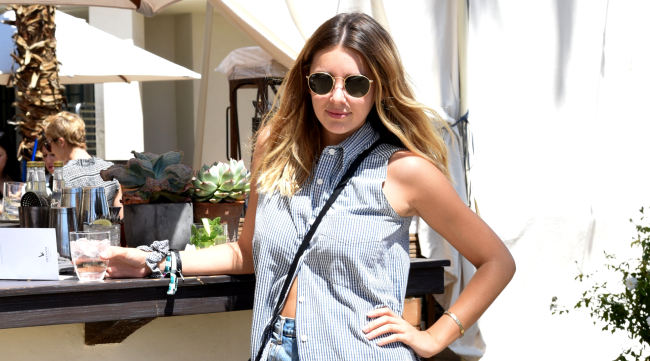 Just like his ex-fiancee Olivia Wilde, Jason Sudeikis has moved on to someone a little more British. Sources confirmed on Monday that the Ted Lasso star is officially dating his co-star on the show, former Page 3 girl Keeley Hazell.

After denials that they were dating back in February and March, Sudeikis, 45, and Hazell, 34, have now gone public with their romantic relationship.

The couple were spotted being very much a couple in photos published by DailyMail.com over the weekend on a PDA-filled walk through New York City.

Olivia Wilde was seen out with the two kids in New York City pic.twitter.com/TSRpwR6ql3

Sudeikis and Hazell, who met back in 2014 on the set of Horrible Bosses 2, were initially rumored to be dating earlier this year, but back them a source told Us Weekly that their relationship was purely platonic.

“They have grown closer for sure, but Jason absolutely isn’t ready for any type of serious relationship,” the source said at the time.

Keeley Hazell was previously best known for being an English glamour model, making regular topless appearances as a Page 3 girl and in lad mags like such as FHM, Loaded, Nuts, and Zoo Weekly.

Prior to working as Bex on Ted Lasso, Keeley Hazell appeared in the TV movie Deadly Matrimony and the TV series The Royals. She played Rex’s assistant in Horrible Bosses 2.

This is Sudeikis’ first public relationship since he and Olivia Wilde ended their 9-year relationship in November 2020 and she moved on with Harry Styles – her co-star in the upcoming film Don’t Worry, Darling.

“When Jason found out about his wife and Harry, Keeley was one of the people whom he turned towards,” a source told The Sun in February. “During this time he was understandably devastated, but she was brilliant and incredibly supportive. He invited her to join him for a dinner with mates in LA, and their flirty banter quickly set tongues wagging. They have met up since, but obviously, it’s all very early days.”

Apparently, things have progressed along nicely for the two of them since.