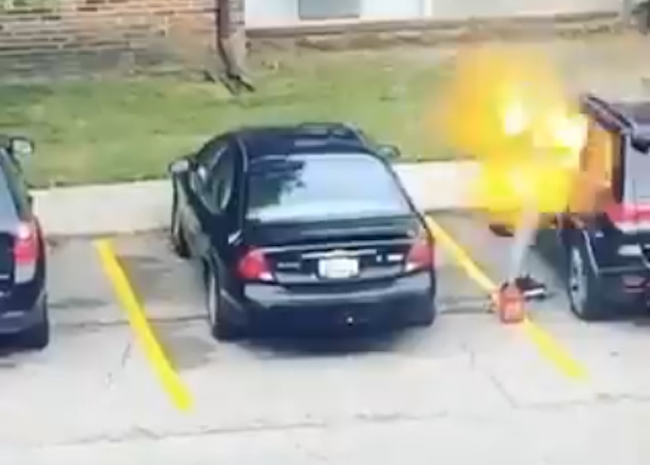 Remember last week’s potential Darwin Award winner, the woman who tried and failed miserably at trying to set a car on fire?

Deputies were dispatched about 8 a.m. Wednesday to the San Remo Villa Apartments near Union Lake Road on reports of a vehicle fire and found a black Jeep fully engulfed, investigators said in a statement. Township firefighters responded and extinguished the blaze.

Let’s relive her awesome moment one more time, just prior to cops and firefighters arriving on the scene.

Well, police in Michigan caught up with the amateur arsonist and her story gets even more bizarre.

TMZ is reporting that her name is Sydney Parham and she was arrested in the Detroit suburb of Harrison Township. Parham was arrested for arson and is currently behind bars.

According to The Detroit News, “witnesses at the scene told responding firefighters and deputies that the woman in the video was Parham and that she knew the owner of the vehicle.”

The weird part of the story is that Parham isn’t a jilted lover at all and her reasons for setting the Jeep on fire are still known only to her.

The owner of the SUV, Avery Stephens, knows Parham but the pair didn’t date and he’s clueless as to why she tried to set his car on fire.