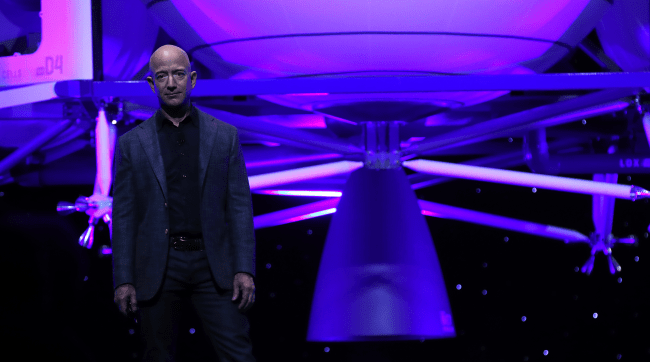 Amazon founder and CEO Jeff Bezos is evolving into a real life supervillain right before our very eyes as he has now announced that he will be going into space on one of his own rockets next month. The question is, is Bezos more of a Lex Luthor type of supervillain or a Dr. Evil?

“Ever since I was five years old, I’ve dreamed of traveling to space,” Bezos wrote alongside an announcement video on Instagram. “On July 20th, I will take that journey with my brother. The greatest adventure, with my best friend. #GradatimFerociter.”

“Gradatim Ferociter” is Latin for “Step by Step, Ferociously” and is the slogan for Bezos’ privately funded aerospace manufacturer and sub-orbital spaceflight services company Blue Origin.

Bezos loves that motto so much he’s got it stitched into a pair of cowboy boots because, uh, he’s a cowboy? A space cowboy.

“You see the earth from space and it changes you. It changes your relationship with this planet, with humanity. It’s one Earth,” Bezos says in the video. “I want to go on this flight because it’s the thing I’ve wanted to do all my life. It’s an adventure. It’s a big deal for me.”

Bezos will also be auctioning off one of the seats on his New Shepard rocket – named after the first American to go into space, Mercury astronaut Alan Shepard. The online auction closes on June 12 and so far the bidding is up to almost $3 million.

The New Shepard will fly the six passengers above the Kármán Line, 62 miles above the Earth’s surface, remain in orbit for 10 minutes so passengers can experience weightlessness and witness the curvature of Earth, then return to Earth.

The rocket will land on a pad located about two miles from the original launch site in Van Horn, Texas.

The entire flight should last around a half an hour.

So far, the New Shepard rocket has flown 15 successful consecutive missions to space and back, but, this will be the first manned space flight for Bezos’ Blue Origin company.

The winning bid amount will be donated to Blue Origin’s foundation, Club for the Future.