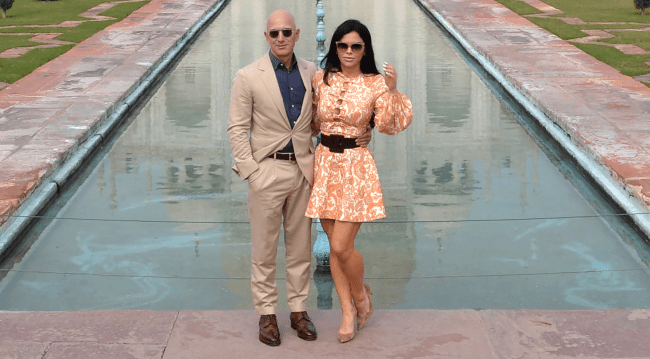 All the inspiration Bill Gates needs to get right back on the horse after losing billions of dollars to his wife in a divorce settlement is take one look at the life Amazon founder Jeff Bezos is living these days.

The 57-year-old Bezos has moved on gracefully as his ex-wife Mackenzie Scott has already remarried and given away over $5 billion.

In fact, things are going so well for Bezos he reportedly commissioned the building of a new custom superyacht from Oceanco that is going to be so big it will need its own “support” yacht complete with helipad.

Bezos’ superyacht, thus far known only by its project name Y721, will be 127 metres (420 feet) and will cost somewhere in the neighborhood of $500 million, reports the Evening Standard. (It’s a very nice neighborhood.)

Plans for the luxury sailing ship are being kept under wraps but some details have now emerged via its Netherlands-based manufacturer Oceanco’s website and through enthusiast forums.

The details so far available suggest it may be modelled on the 106-metre Black Pearl, pictured below, currently the largest and most technologically advanced sailing yacht in the world.

Brad Stone’s forthcoming book Amazon Unbound confirmed that the ship is being built outside Rotterdam, but added that even those in the know are being kept in the dark as to what it will look like and what features will be implemented by the time it is completed.

The three giant masts are the reason for the “support” yacht because they don’t allow room for a helipad on the main boat and, as well all know, it’s not really a superyacht without a helipad.

Bezos reportedly placed the order for his new ship prior to the pandemic after spending time on the yacht Eos, owned by his friend Barry Diller and his wife Diane Von Furstenberg.