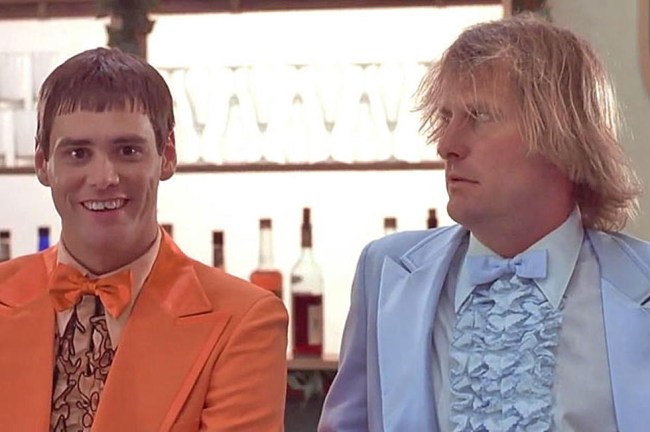 There’s a scene in the ABC sitcom Happy Days where the Fonz wakes up in the morning, walks into the bathroom, goes to comb his hair, and stops dead in his tracks because his hair already perfect. It’s been nearly 25 years since the release of Dumb and Dumber and that’s exactly how I view the movie. Any revisionist tweaks of the Farrelly Brothers classic would only diminish the product.

Try even imagining what the movie would have been like without one of its two stars–Jim Carrey or Jeff Daniels. Nearly impossible. Well, that was almost the reality.

In a segment during Variety’s “Actors on Actors,” Jeff Daniels revealed that during the first week of shooting of “Dumb & Dumber,” his co-star Jim Carrey didn’t work at all. Daniels said that after numerous days shooting scenes in which he appeared alone, he realized that his audition was still going on, as the studio wanted to replace him.

The irony in the studio wanting to replace Daniels is that directors Bobby and Peter Farrelly actually sought him out to play the role of Harry Dunn.

“Everybody wanted me except the studio,” Daniels said.

After getting spooked when he realized he was still auditioning through the first week of shooting, Jim Carrey (who was on set, just not acting yet) gave him some words of encouragement.

“He was always a champion of me,” he said. “Jim walks in, taps me on the shoulder and says, ‘Just keep doing what you’re doing, they love you.’”

A word where that pumpkin pie haircutted freak doesn’t play Harry Dunn is not a world worth living in.