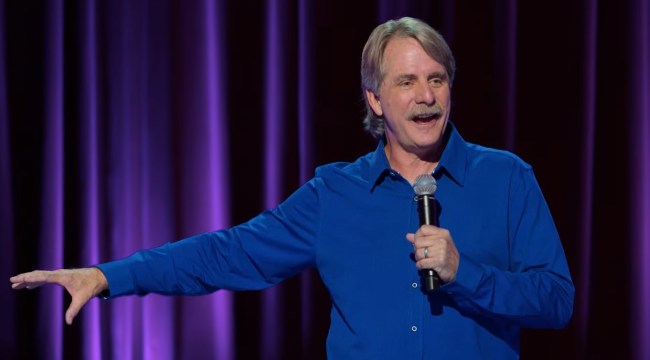 Hey, have you heard the one about participation trophies? You know the one — where a boomer complains about how easy subsequent generations have had it and how coddled we apparently are? You’re familiar, right? Well in case you aren’t, Jeff Foxworthy has got you covered as he recently told the highly original joke during his new Netflix standup special (which is conveniently titled, believe it or not, “The Good Old Days”).

Luckily for Jeff, while his participation trophy joke failed to land, the aforementioned millennials took to Twitter to make it way funnier. And if that doesn’t epitomize Jeff Foxworthy’s career in 2022 — the fact that memes about his comedy are funnier than his actual comedy — then I’m not sure what does.

As many people have pointed on, not only were participation trophies actually invented by Foxworthy’s generation, but this is a man who made his name on telling people they “might” be a redneck and hosting a game show that rewarded boomers for outwitting grade-schoolers.

REMINDER: Boomers invented participation trophies because *they* couldn’t handle it when *their kid* wasn’t the best player on the best team. https://t.co/Q4ZzsWfNSn

Jeff Foxworthy is the son of an IBM Executive, and his first job was at his dad's office. https://t.co/89Y9E31igW

Can someone explain to me how Jeff Foxworthy being given a Netflix special in 2022 is not, in itself, a big ass participation trophy? https://t.co/reSeErEG24

The joke that made Jeff Foxworthy famous is literally handing out participation trophies. You get a redneck trophy, not because you are a redneck, but because you just might be one.

Don't know how many times I need to scream this but I'll do it again:

Jeff Foxworthy's generation ***gave the trophies to the kids***. The kids did not saunter down to the trophy shop and it themselves. https://t.co/geZiruDCnA

if youuuuu put a joke in your 2022 comedy special that’s 15+ years old…….youuuuu might be a Jeff Foxworthy. https://t.co/yWtaMSYDGe

didn't jeff foxworthy host a show that rewarded adults with money for being able to pass elementary school?

Boomers raise a generation, then look them dead in the face and say 'whoever raised you was a fucking idiot' with zero irony https://t.co/5zRD8R35k7

If you are, for some reason, interested in checking out “The Good Old Days”, the standup special is currently streaming on Netflix.

RELATED: Amy Schumer, Continuously The Worst, Wanted To Have Ukraine’s President Zelenskyy Appear At The Oscars