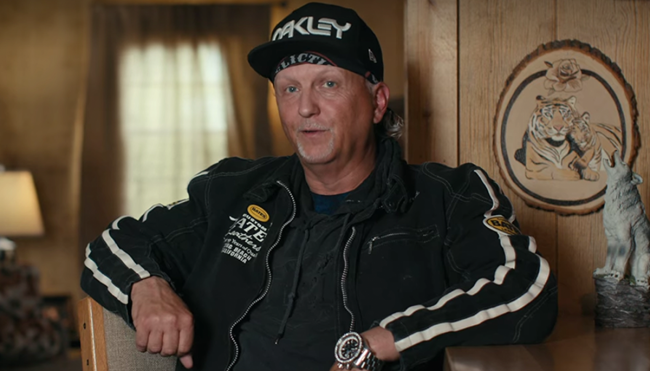 It’s been a little over a year since a world in need of much-needed distraction discovered one in the form of Tiger King, the Netflix series that became an overnight sensation thanks to a surreal cast of larger-than-life characters, a vertigo-inducing series of twists and turns, and some truly glorious footage of a strip club owner riding a Jet Ski while Survivor blared in the background.

The impossibly eccentric Joe Exotic may have been the star of the show, but Tiger King featured plenty of other people who would feel perfectly at home in a Christopher Guest mockumentary. This includes Jeff Lowe, the human embodiment of a can of Monster Energy who used some of the money he made by charging influencers to pose with baby tigers to purchase the zoo from Exotic in 2016 to help him financially recover after being ordered to pay that bitch Carole Baskin over $1 million as the result of a lawsuit.

It didn’t seem like the Tiger King saga could get much weirder than it already was when the documentary came out, but it turns out it was only the beginning. It’s virtually impossible to keep track of all developments that have unfolded over a year that saw online sleuths trying to prove Baskin killed her husband, Exotic unsuccessfully angling for a presidential pardon, and Lowe claiming he’d seen a video of John Finlay donning a cheerleading uniform before engaging with some extremely frowned-upon acts with animals at the park.

Now, we’ve been treated to yet another absurd development due to a recent incident involving Lowe, who TMZ reports was hospitalized after having a stroke in the early hours of the morning at a casino in Oklahoma on March 18th. However, in classic Tiger King fashion, he and his wife Lauren have added some serious intrigue by claiming the emergency was triggered by an unidentified man they say poisoned him while they were having dinner that night.

According to her account, they were approached by a guy who said he was a fan of Tiger King and believe he managed to spike Lowe’s drink with an unknown substance that triggered the stroke that resulted in him being airlifted to a hospital in Texas. She says doctors didn’t detect anything suspicious in the drug tests they conducted over the course of Lowe’s three-day stay, but I have a feeling this is just the beginning of the latest chapter in this neverending story.