Jennifer Lawrence Got High Before Filming A Scene With Meryl Streep, Says Everyone Was ‘F-ing With Her’ 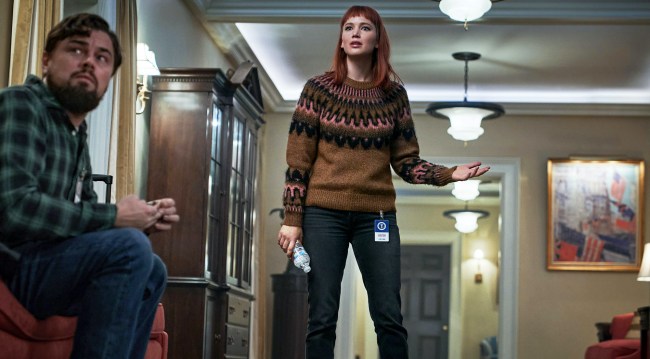 Have you ever gotten high at work? I certainly have. #WorkFromHomeLife. Totally different story when you have an office to go to, though. Not for the faint of heart, if we’re being honest. And I’m saying this as an entertainment writer. I can only imagine what it would be like to take a rip of the bowl and then go have to stand next to the legendary Meryl Streep, which is apparently exactly what Academy Award winner Jennifer Lawrence did while filming Don’t Look Up.

During a recent Q&A session following a screening of Don’t Look Up, director Adam McKay (Anchorman, The Big Short) detailed how Lawrence went method for her role of astronomer Kate Dibiasky, as she mimicked her character’s habit of getting high for a scene with fellow Oscar-winner Meryl Streep.

McKay explained that the 31-year-old Hunger Games alum asked for permission to partake before filming a scene opposite Streep in which she had no scripted lines of dialogue.

“Because my character was getting high in the movie,” Lawrence interjected.

“So Jen was like, ‘Are you gonna throw me some improv?,’ which we always do,” recalled McKay, the veteran comedy director (Anchorman, Step Brothers) who has turned to Oscar-contenting social satires (The Big Short, Vice) in recent years. “And I was like, ‘No, you can get high.’”

McKay couldn’t help but mess with Lawrence a bit, though:

“I kept turning to my script supervisor, Cate Hardman, and was like, ‘I just want to say, “Hey Jen. I think I have a monologue idea for you.”’ And I would look at Jen and was like, ‘I can’t do it. It would be too mean.’ So I left you alone.”

“I was a real target,” responded Lawrence, who noted earlier in the Q&A that Jonah Hill teased her throughout production with claims that their veteran co-star, Oscar-winning Bridge of Spies actor Mark Rylance, was upset with her. “Everyone was f****** with me… I guess because I was high. Easy to f*** with.” [via Yahoo Movies]

RELATED: First ‘Don’t Look Up’ Reviews Suggest Leonardo DiCaprio Will Contend For Another Oscar This Year

In solidarity with Jennifer, I, too, will be getting high before watching Don’t Look Up. It’s the least I can do.

Here’s the official synopsis for Don’t Look Up, via Netflix:

Kate Dibiasky (Jennifer Lawrence), an astronomy grad student, and her professor Dr. Randall Mindy (Leonardo DiCaprio) make an astounding discovery of a comet orbiting within the solar system. The problem — it’s on a direct collision course with Earth. The other problem? No one really seems to care. Turns out warning mankind about a planet-killer the size of Mount Everest is an inconvenient fact to navigate. With the help of Dr. Oglethorpe (Rob Morgan), Kate and Randall embark on a media tour that takes them from the office of an indifferent President Orlean (Meryl Streep) and her sycophantic son and Chief of Staff, Jason (Jonah Hill), to the airwaves of The Daily Rip, an upbeat morning show hosted by Brie (Cate Blanchett) and Jack (Tyler Perry). With only six months until the comet makes impact, managing the 24-hour news cycle and gaining the attention of the social media obsessed public before it’s too late proves shockingly comical — what will it take to get the world to just look up?!