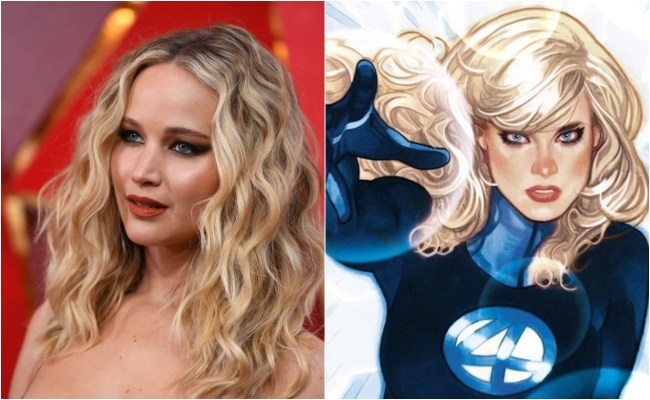 Late last year, as Disney was announcing ther future of both the Marvel Cinematic Universe and the Star Wars universe, the Mouse House revealed that — following their acquisitions of 21st Century Fox — Marvel’s First Family, the Fantastic Four, would finally be joining the MCU.

Tapping Spider-Man: Homecoming director Jon Watts to helm the project, Marvel Studios head Kevin Feige revealed the logo for the project and not much else. After all — with a bevy of MCU projects already in the works, and with director Jon Watts working on the untitled third Spider-Man film — it’s going to be a few years until Fantastic Four comes to fruition anyway.

But, with various stars from the MCU recently congregating down in Australia for the filming of Thor: Love and Thunder, there have been recent reports that an A-List actress will be joining them to take on her new role in the MCU: that actress, according to The Daily Telegraph, is Academy Award winner Jennifer Lawrence, who they claim has joined the MCU as Susan Storm, a.k.a Invisible Woman.

There are rumors that Jennifer Lawrence has been cast as Susan Storm, a.k.a. Invisible Woman, in the Marvel Cinematic Universe 🍿

The Tinseltown exodus Down Under continues next month, when Oscar winner Jennifer Lawrence is expected to arrive to film the latest Fantastic Four film, according to The Daily Telegraph.

The paper reports that the Marvel superhero film franchise is set to ‘bed down’ in Australia “for the foreseeable future”.

The rumor immediately split opinions, as fans have long been hoping that the Marvel Cinematic Universe would cast real-life married couple John Krasinski and Emily Blunt in the roles of Mr. and Mrs. Fanstastic, respectively. Plus, Lawrence just spent the better part of the last decade portraying Mystique in Fox’s X-Men universe, so it seems unlikely that she’d hope back into a superhero franchise role. Still, all that said, if this casting were true, you could totally understand Disney’s thought process, as Lawrence — still just 30-years-old — is one of the biggest stars in the world.

Another argument being made is that Marvel hasn’t even begun writing Fantastic Four, but I’m confused as to why that even matters. This is akin to suggesting that Marvel had all of The Avengers written when Nick Fury popped up in The Avengers post-credit scene: given the structure of the MCU, a character such as Susan Storm can easily be introduced without having their own film in production.