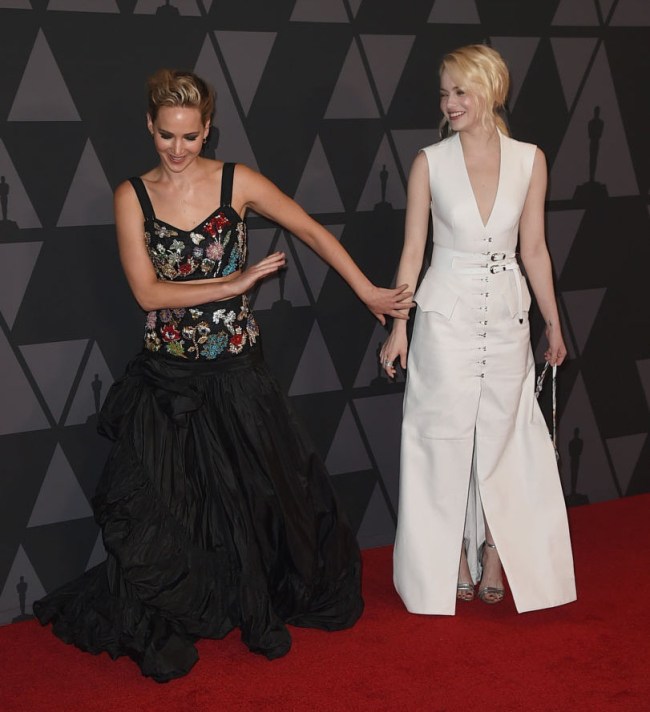 Jennifer Lawrence may be America’s sweetheart, though that is certainly open to debate, but if you are a big fan of hers don’t you dare stop her on the street or she’ll be a rude a-hole to you. No, really, she readily admitted it in a new interview she did for Variety with Adam Sandler.

“Once I enter a public place, I become incredibly rude. I turn into a huge a–hole,” Lawrence said. “That’s my only way of defending myself.”

The actress attested that comedians, such as her famously friendly pal Amy Schumer, have a harder time refraining from interactions because people “just assume they’re your best friend.”

“I take my dog to the park all the time, to Central Park,” Lawrence said. “As soon as I meet her in the park, we’re f—ed.”

Sandler, while he agreed with her take, uses a much more zen approach to intruding fans…

“When I’m out eating, people do pull up a chair,” he shared.

Though Sandler said he doesn’t shut down interactions, he revealed a new move that has been working when fans his age ask for a picture.

That’s like some type of Jedi mind-trick shiz right there.

Sandler and Lawrence also talked about how they prefer to ignore their movies’ reviews, something her now ex-boyfriend and director of mother! Darren Aronofsky drove her nuts over.

“We’d be on the tour together. I’d come back to the hotel, and the last thing I want to talk about or think about is a movie. He comes back from the tour, and that’s all he wants to talk about and I get it. It’s his baby. He wrote it. He conceived it. He directed it. I was doing double duty trying to be a supportive partner while also being like, ‘Can I please, for the love of God, not think about mother! for one second?’”

Don’t make J-Law angry, you wouldn’t like her when she’s angry.

Lawrence also admitted to Sandler that she LOVES the movie The Waterboy.

“The Waterboy, I would watch every day when I came home from school,” Lawrence told Sandler. She then proves it by actually reciting quotes from the movie.

And here’s the entire discussion all in one long half-hour video you can watch because what else do you have to do today?