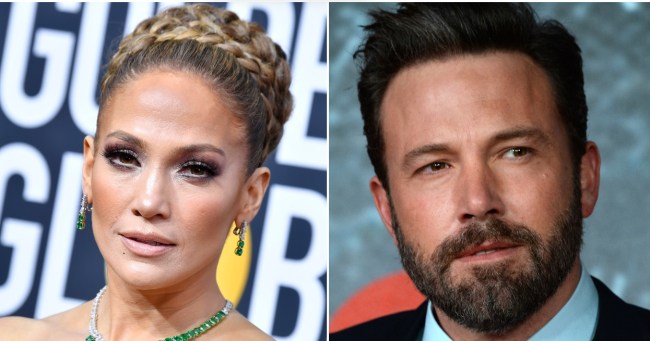 We have conflicting reports on whether Jennifer Lopez and Ben Affleck are back together.

On Monday afternoon, an E! News report went viral claiming the two has rekindled their relationship after they spent a week vacationing in Montana.

17 years after calling off their engagement, Jennifer Lopez and Ben Affleck are back: “The chemistry is unreal." https://t.co/1JVBeh1eMs pic.twitter.com/1T4HJwZHg3

After the stars appeared separately at the VAX LIVE concert in Los Angeles on Sunday, May 2, they jetted off together to the Yellowstone Club in Montana, where they vacationed together for about a week, a source tells E! News. “They were alone,” says the source. “Just the two of them.”

Radar Online immediately poured water at the E!News report and claims that J-Lo has already dumped Ben Affleck after a brief fling because she realized he wasn’t “husband material.”

‼EXCLUSIVE:‼ #JLO and #benaffleck are OVER! Here's what happened!https://t.co/rTuPF8nf9f‼

Jen was testing out the water with Ben. She’s still angry with Alex and might have wanted revenge, but she also has never fully gotten over Ben until now. After spending time with him she realizes why they never worked out in the first place. He’s a good man and a good friend, but not husband material,” sources tell Radar.

According to Radar, J-Lo was turned off by the woman who leaked a video DM Ben Affleck sent her after she unmatched him on a dating app.

The source added, “Plus, after video was leaked of Ben creeping around a much younger lady on a dating app, Jen walked away. Don’t forget Alex was accused of contacting a younger lady on social media too while they were engaged. It has all been triggering for Jen.”

I’m not entirely sure which report to believe but it’s plausible that J-Lo was just looking for a quick rebound before fully moving on from her previous long-term relationship with A-Rod.