Is The ‘Jeopardy!’ Contestant Who Broke His Own Record For Winnings In A Single Episode Reaching ‘Sex Symbol’ Status? 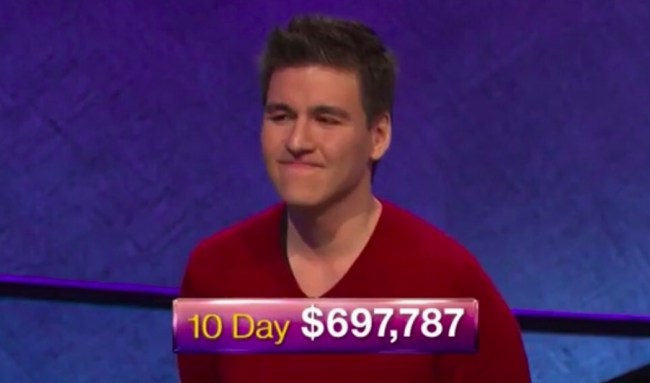 Not only is Holzhauer a brain, but as a Vegas sports bettor, he’s a deviation from the other nerdburgers who have appeared on Trebek’s show. Holzhauer has been gambling competitively since 2006 and is a respected player amongst several Vegas sportsbooks.

Yet another stellar answer on a @Jeopardy sports question given to Alex Trebek.. “What is Buuush League”#Confidently #withChutzpah #Doh pic.twitter.com/7DbGjegjt6

On the episode that aired Wednesday, the 34-year-old raked in $131,127 to capture his 10th straight victory and break the single episode winnings record of $110,914, which he set during his fourth appearance on April 9th.

He has won $697,787 during his 10-day run and is already second on the show’s all-time, regular-play winnings list, behind only past great champion Ken Jennings.

Jennings won more than $2.5 million during his 74-game winning streak in 2004. Holzhauer is on pace to surpass Jennings in just 36 games and now owns the four most prolific single-day performances ever on the show.

James Holzhauer won $110,914 in a single game of Jeopardy, an all-time record. He did with with smarts, sure—but also with a nearly flawless command of Jeopardy! game theory. Here's how he did it: https://t.co/2OSh0B0a3U pic.twitter.com/cnro25MNhD

During his most recent performance, Holzhauer went a perfect 40-for-40 on responses in his first two rounds and entered Final Jeopardy! with a cartoonish lead over his two competitors: $71,114, $5,400, $5,000 were the respective winnings.

I would never accuse this dude of being a fraud, but sports bettors typically aren’t choir boys. Do Jeopardy! producers check for earpieces? Could Holzhauer be getting fed answers in real time by a super robot off-site? 40-for-40 in responses through two rounds! How many degenerate sports bettors do you know with knowledge of Atticus Finch referring to the ancient district in which you’d find the Greek capital? The answer is zero, Trebek.

If it’s revealed that Holzhauer is gaming the system, you heard it here first.