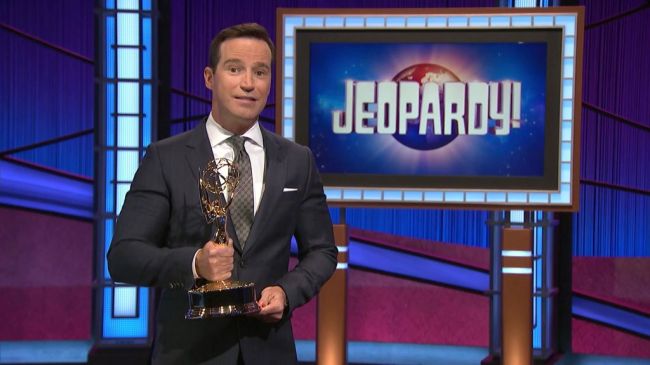 Newly announced Jeopardy host Mike Richards, who also serves as a producer on the show, is already in hot water before making his first official appearance as Alex Trebek’s replacement.

On Wednesday, The Ringer’s Claire McNear wrote an exposé on Richards and what she found was pretty troubling.

Last week Mike Richards wrote that lawsuits from The Price Is Right didn’t “reflect the reality of who I am.”
I went looking for who he is, talking to current and former colleagues and listening to a podcast he hosted at Price. What I found was troubling. https://t.co/A8AEsPHCMA

According to McNear, staff members on Jeopardy were blindsided by Sony announcing that Richards was going to be named the permanent host of the show last week.

Concerns about Richards extend to the Jeopardy! staff, with a source close to the show telling The Ringer that employees were blindsided by Sony’s announcement and multiple sources describing how staff morale has deteriorated under Richards’s watch as EP.

Richards’ hiring received immediate backlash when multiple sexual discrimination lawsuits from his time as executive producer of “The Price Is Right” resurfaced following the announcement.

During the election, I did some research threads digging into candidates' past to find issues that could give them trouble with voters.

With news that Mike Richards is the favorite to host Jeopardy, here's a similar thread on Richards:

(Disclosure: I am a former J! contestant)

2) Richards was named in another lawsuit by model Brandi Cochran, who won $7 million in damages from the show's production companies.

Cochran's suit alleged Richards "implied to her that she would have been… fired had [her] pregnancy not been secret." https://t.co/GgHLzPFunh

McNear also uncovered Richards’ old podcast “The Randumb Show” that aired from 2013 through 2014 and features him making several racist and sexist comments.

On The Randumb Show, Mike Richards routinely discussed women’s bodies and clothing. He complained women in one-piece swimsuits look “really frumpy and overweight.” When his cohost talked about modeling at CES, he called her a “booth ho” and “booth slut.” https://t.co/A8AEsPHCMA

Richards told his cohost she should audition for roles as a Taiwanese character because she was short. When a guest brought up big noses, he said, “Ixnay on the ose-nay. She’s not an ew-Jay.” https://t.co/A8AEsPHCMA

During a conversation about nude photos on the podcast, Richards awkwardly asked his female co-host if she had taken “booby” pictures on her phone.

Richards would also routinely mock his co-host’s economic status and berated her for accepting unemployment insurance after she was fired from her job. 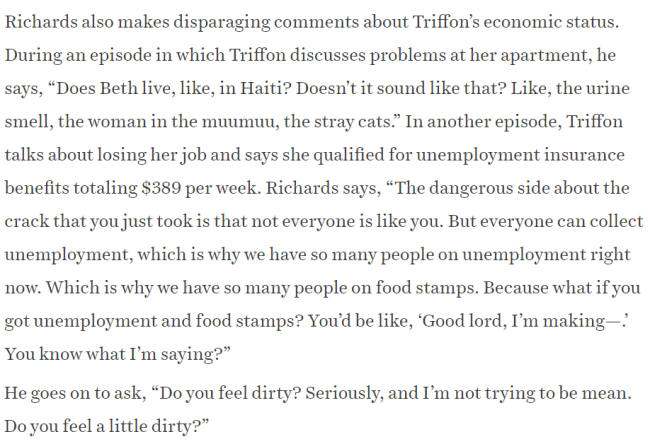 The podcast was deleted from the Internet when The Ringer asked Richards about it via email.

Two hours after we asked Richards and Sony about the podcast, all episodes were wiped from the internet and the hosting site, https://t.co/RQsynWh1KT, was deleted. pic.twitter.com/kYqEuGIpae

Richards went on to issue a statement admitting to deleting the podcast from the Internet and apologized for his comments which he says were “unacceptable.’

Last night, Richards issued a statement to The Ringer responding to the resurfacing of his podcast and stating that he deleted the episodes after being asked about them: https://t.co/A8AEsPHCMA pic.twitter.com/zGk4hYYrWG

Following The Ringer’s article people are asking Mike Richards to step down from his role as Jeopardy host.

Mike Richards should step down as upcoming Jeopardy! host, and here’s why https://t.co/Fq8brayH3K pic.twitter.com/5drABwY1G6