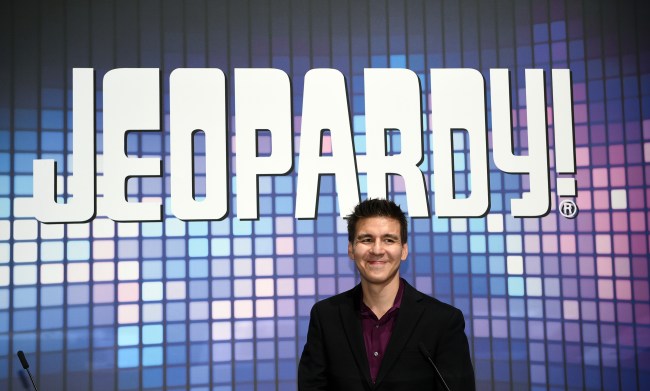 It’s on, my dudes, and someone’s about to get served. Last week, ‘Jeopardy James‘ Holzhauer absolutely dominated the Jeopardy! Tournament of Champions and easily vanquished his nemesis Emma Boettcher, the librarian from Chicago who ended his epic run.

Until Jeopardy James was unseated by Emma, he was destroying Jeopardy! records left and right. Throughout his 32-game win streak, he earned $2.46 million which fell just short of the all-time record set by Ken Jennings.

However, Ken’s streak lasted 74-games because James bets unlike anyone in the show’s history. James holds the 16 highest single-game records for most money earned. He kept on demolishing his own record.

Now, there will be a G.O.A.T tournament. Jeopardy James vs. Ken Jennings vs. Brad Rutter (the other legend of Jeopardy!) spread across three days (more of necessary due to a tie) where the three Jeopardy! titans will be competing for a million dollars.

The top three contestants in JEOPARDY! history will face off in an epic primetime special event: “JEOPARDY! The Greatest of All Time,” starting January 7 at 8|7c on ABC. #JeopardyGOAT pic.twitter.com/7PJUi57206

This was only announced yesterday and James has wasted no time with the trash talk, he’s already getting under the skin of his opponents on Twitter. James and Ken are both pretty active on Twitter (find me on Twitter at @casspa) and I’m already loving how this is playing out.

You know they say that all men are created equal, but you look at me and you look at @KenJennings and you can see that statement is not true. pic.twitter.com/Oi1dO4qomI

See, normally if you go one on one with another @Jeopardy contestant, you got a 50/50 chance of winning. But I'm a genetic freak and I'm not normal! So you got a 25%, AT BEST, at beat me. Then you add @bradrutter to the mix, your chances of winning drastic go down.

See Ken, the numbers don't lie, and they spell disaster for you in January.

That’s a bonafide mic drop from Jeopardy James. He’s rattled his opponents early. But Ken Jennings is arguably one of the most clever people in the world. He’s proven that on Jeopardy! and elsewhere in life. I actually competed against Ken in some online trivia app a while back and he whooped my ass before I could even blink.

About to get destroyed by @KenJennings on @FleetWitHQ trivia worse than the time I played Chris Ferguson heads-up in Omaha Hi-Lo on Full Tilt pic.twitter.com/ech83giHLS

Ken threw me a ‘fav’ on that tweet after demolishing me but didn’t do me the courtesy of replying like he’s already done with Jeopardy James’ taunts.

All proceeds go to buying @James_Holzhauer a nice sport coat or blazer, and maybe even a necktie https://t.co/6zPNEbylGG

“All proceeds go to buying @James_Holzhauer a nice sport coat or blazer, and maybe even a necktie.” Boom, roasted.

brb risking federal prosecution by placing a side bet on Brad. https://t.co/LkQtcEHI8w

And there are already odds set for the event:

Normally, I’d say that taking the dark horse in this battle (Brad Rutter) would be a solid play since all of the eyes are on Jeopardy! James but I can’t foresee a world where James loses this. Neither Ken nor Brad are likely to alter their gameplan and bet on the Daily Doubles in the same way James does. Assuming James is able to get his hands on a few of those throughout the three-day tournament he’ll be able to take a comfortable lead based on his betting strategy alone.

In the past, it’s been interesting to see former Jeopardy! champions discuss how they’re envious of James’ betting strategy so it would be pretty fun to see Ken and Brad come out firing like James. That would be the GOAT tournament we all want to see.

For information on the ‘Greatest of All Time’ Jeopardy! Tournament you can follow that link and see our write up from yesterday with details on when this event will take place and how it will all play out.