‘Jeopardy!’ Banned Players From Wagering $69, Won’t You Sign This Petition To Allow Our God-Given Right To 69? 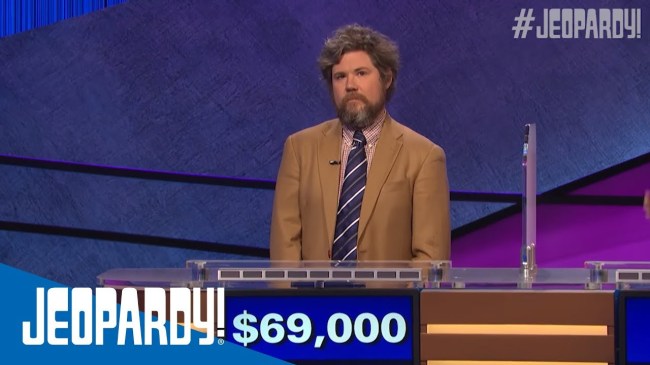 Jeopardy! is enjoying the spectacular record-setting run by James Holzhauer and it will eventually set up a battle against Ken Jennings, pitting two greatest contestants in recent memory against each other. However, Jeopardy! executives have made one unsettling and megalomaniacal impropriety that will taint the beloved TV game show — they have banned players from wagering $69. I’m sorry, I thought this was America?

Ken Jennings, who boasted a 74-game winning streak back in 2004, made a perturbing revelation last week. The former Jeopardy! champion was discussing the lack of recognition he was given for placing small wagers, which is completely opposite of Holzhauer’s strategy. “I don’t feel I get enough credit for making small, sensible Jeopardy wagers, which helped the show with its prize budget,” Jennings tweeted.

I don’t feel I get enough credit for making small, sensible Jeopardy wagers, which helped the show with its prize budget.

A Twitter user complimented Ken for his sexual double-entendre bid of $69 and Jennings broke the news that Jeopardy! executives banned wagers of $69 after he pulled off the nice innuendo on the network game show. “This is officially forbidden on Jeopardy now, as of last year. Not even joking,” Jennings tweeted.

this is officially forbidden on Jeopardy now, as of last year.
not even joking.

Holzhauer, the professional sports gambler from Las Vegas, confirmed Jennings’ tweet and then explained that there are actually five number amounts that are banned from being wagered.

Actually, there are five banned wagers. This is probably the most innocuous one. https://t.co/5Yt0Y9JbKX

However, banning sixty-nine? That’s not nice. What if there is an occasion when there is an actual logical reason to bid $69 as part of a strategy and not just a tip of the hat to the sex position?

I created a Change.org petition titled “Make Jeopardy Allow Contestants To Wager $69” to force executives at CBS and Sony to allow players to 69 on the network game show. Because there should be no shame in appreciating the f*cking number before 70.

So tricking Ken Jennings to ask, “What’s a hoe?” is copacetic but the number 69 is too risque?

Flashback to this amazing moment in Jeopardy! history when contestant Austin Rogers won exactly $69,000 and there was nothing the network bigwigs could do about it. Nice.