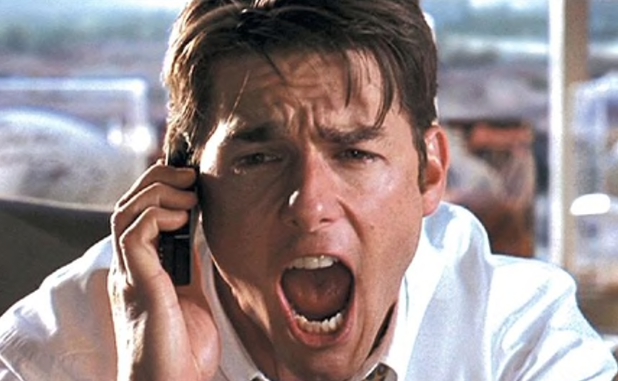 On this day in 1996, Jerry Maguire was released in theaters. Twenty one years later, I have yet to change the channel when I stumble across it on TBS. The movie brought in $273 million worldwide, incredible margins on the $50 million budget the producers had to make it. Jerry Maguire was nominated for five Academy Awards, including Best Picture and Best Actor for Tom Cruise, with Cuba Gooding Jr. taking home the Academy Award for Best Supporting Actor.

The movie also birthed one of the most timeless phrases in any entertainment production in the planet’s history: ‘Show me the money!!!’ Your uncle probably still yells it at Thanksgiving begging for a laugh.

But the iconic phrase didn’t just impact pop culture for decades to come, it legitimately saved one dude’s life.

The story, which was first published by John Dickson of SantaBarbara.com, details the rags to riches tale of Santa Barbara resident Haig Fisher. It’s a wild one.

Many years ago, a friend of mine, Haig Fisher who lives in Santa Barbara, had been down on his luck personally and financially when he had an idea that turned everything around. A single thought changed his entire life.

Back in the late 1980’s, Fisher & his wife had a retail store on State Street named “Twist N Shout” where people could lip synch to a song and make music videos and audio tapes of their recordings.  Fisher tells me that Twist N Shout pretty much was a total failure and they lost everything: his house and all the family’s money. That of course took a huge toll on his marriage and Fisher soon found himself divorced, broke, and sharing custody of his two small children, all while living out of a hotel for several months.

Fisher took a job selling sports collectibles in the morning and at night was working for a funeral home selling cremation services.  He was doing this for a few years.  Fisher would often go to the movies when he had free time as a way to escape some of the pressures of everyday life.

One fateful day changed all that:  it was in December 1996 when Fisher went to see the movie, “Jerry Maguire.”  During the telephone scene when Tom Cruise and Cuba Gooding, Jr. were yelling “Show Me The Money” at each other, it quickly dawned on Fisher that this could become a very big catch phrase. He realized that “Show Me The Money” might soon be something uttered by millions of people across the nation, similar to the way the Wendy’s hamburger chain’s phrase “Where’s The Beef” took the nation by storm in 1984.

Without any delay Fisher literally ran out of the theater to trademark the phrase “Show Me The Money.”

As part of the trademark process Fisher quickly went to Sears and bought a package of white t-shirts, took them to Kinko’s and had them print “Show Me The Money” on the front.  With previous contacts in the apparel industry, Fisher filled out an application for trademark protection in the clothing class, and express mailed everything to the trademark office that afternoon.

Apparently Fisher wasn’t the only one with the idea to trademark “Show Me The Money,” but, as it turns out, he was the first. There were 26 other applicants who filed for a similar trademark after Fisher did, including TriStar Pictures, who made the movie “Jerry Maguire.” Because they weren’t first in line, if the Hollywood giant wanted to use the phrase “Show Me The Money” for clothing, they would need to first get the permission from Haig Fisher in Santa Barbara, California.

Over the ensuing weeks TriStar Pictures made multiple offers to Fisher to purchase his trademark. Though financially struggling, Fisher didn’t accept them. And, as Fisher predicted, the phrase “Show Me The Money” became a nationwide – and worldwide – sensation.

With the pressure on, TriStar Pictures finally ended the war of words and made Fisher an offer he couldn’t refuse. They showed him the money. Fisher assigned TriStar Pictures his trademark and it turned out to be a life changer for him. Fisher took the proceeds from the trademark sale and bought the house in Santa Barbara that he still in lives in today.

TriStar Pictures, impressed with Fisher’s “johnny on the spot” creativity, then offered him a job in their Culver City studios to work in their intellectual property division. They wanted him to monitor and handle all the studios trademark matters. Because his children were comfortably stable in their school and with both parents involved in raising them, Fisher graciously declined TriStar’s offer. Instead he started his own company: “Trademarks, Etc.,” now in its 13th year, which helps companies and entrepreneurs trademark their logos, names, and phrases.

In one moment, on one day, in a dark movie theater, during a dark period of his life, Fisher was suddenly flooded with the light of inspiration. And it has been shining bright ever since. Tom Cruise and Cuba Gooding, Jr. threw him a lifeline that day – and he took it.

Fischer is far from the only one who has made millions with a handful of words. Michael Buffer, the American ring announcer for boxing and professional wrestling matches, has grossed about $150 million for wholesale licensing the phrase “”Let’s Get Ready to Ruuummmbbbbllllle!” According to ABC News, for an announcing engagement that takes 10-15 minutes, Buffer makes in the range of $15,000 to $30,000.

This life thing, yeah, I’m doing it all wrong.