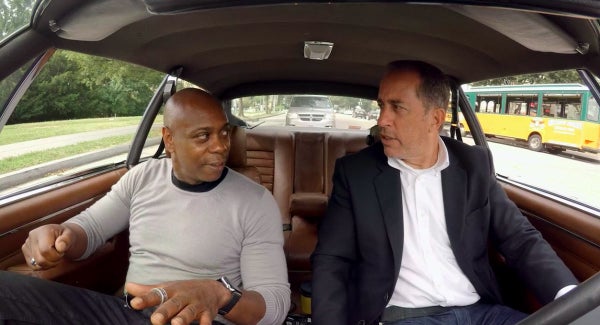 The Hollywood Reporter interviewed Seinfeld and asked the legendary stand-up comedian about how the series has evolved since the TV show was introduced.

“When I get to the editing part of it, I know better what I want to make the show into,” Jerry explained. “Although each show kind of is its own thing and takes me in a different direction, I go, ‘This one I think is going to be about this, and this one is going to be about this.’ When you start, you have three hours of material, so let’s say you pick out 20 items and you know you can only use 10 of those. It becomes quite a puzzle to assemble it.”

RELATED: Jerry Seinfeld Talks About Being A Scientologist And Goes On Expletive-Laden Rant About His Worst Enemy

THR asked Jerry what his favorite episode was and not surprisingly, Seinfeld used the question to promote the latest season of Comedians in Cars Getting Coffee.

“I’m really excited about Eddie Murphy this year because I think a lot of times with interviewers, if I can call myself that, it’s like a nut you want to crack,” Seinfeld said. “You want to get inside the shell and get to the nut inside — literally, in my case.”

“And I feel like we brought a certain perspective on Eddie that people really want to see and maybe have been missing,” Jerry added. “It’s hard to see these people in the conventional press format that they do; it’s hard to get to that person.”

“I think something like Larry King and Charlie Rose, those were the shows where you really — but even on those shows, they don’t work as well because the only one who can talk to most people is someone that does what they do, they know how to talk,” Jerry continued. “I think they should just have interviewers on those shows.”

Jerry said he was able to get Eddie Murphy on the comedy show because they have a lot in common such as they’re “both from Long Island,” “both started at the same club on the same week, the first week of July 1976.” Seinfeld added that he “thought people would really like to see him again” and he appears on the first episode titled “I Just Wanted to Kill” in the 11th season of Comedians in Cars Getting Coffee.

Eddie has been sadly missing from pop culture and especially stand-up comedy over the past decades, which is expected to change since Murphy is allegedly in talks with Netflix on a massive $70 million deal for new comedy specials.

When asked how he prepares for the Comedians in Cars Getting Coffee interviews, Jerry Seinfeld answered: “I don’t. There’s no preparation, just a hang.”

You can read the entire Jerry Seinfeld interview over at The Hollywood Reporter.

You can check out more entertainment news about Jerry Seinfeld HERE.