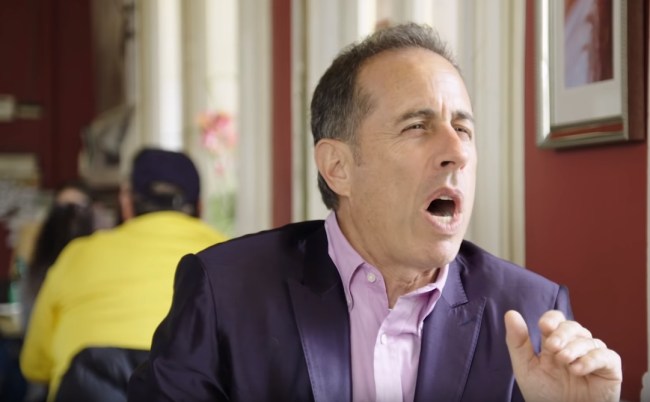 On a new episode of Comedians in Cars Getting Coffee, Jerry Seinfeld went on an expletive-laden rant about his worst enemy. Just the mention of this one comedian’s name sent Jerry into a rage in the middle of his TV show that is supposed to be about comedy.

In a recent episode of Comedians in Cars Getting Coffee, Jerry interviewed Bridget Everett, a comedian who appeared on the Inside Amy Schumer TV show and is a cabaret performer. Everett is good friends with Bobcat Goldthwait, Jerry’s worst enemy.

Seinfeld and Goldthwait had a vicious rivalry while they were both comedians in the New York comedy scene.

Seinfeld despises Goldthwait so insanely much that Jerry had Bobcat’s name bleeped out of the episode (fellow comedian Anthony Jeselnik thought Jerry was talking about him at first).

Goldthwait directed Everett’s Amazon TV pilot Love You More in 2017 and cast her in last year’s truTV series Misfits & Monsters. So Everett brought him up during Comedians in Cars Getting Coffee and it provoked Jerry to go on a rant that lasted several minutes and rained down many F-bombs.

“I don’t like him. At all,” Seinfeld said on the show. “I had kind of forgotten about him and then there was a little article about him in the paper and even in that there was a veiled reference to his dislike of what I did. It didn’t have my name, of course.”

“He used to rail against me ’cause they weren’t as wild and dangerous as he was. ‘Cause he sucked,” Seinfeld said of Goldthwait. “He wasn’t funny. And that’s why he didn’t get anywhere. Cause in comedy, nobody gives a f*ck if you’re cool, if you’re lame. If you’re funny, you win. If you’re not funny, you don’t.”

“And he’s not funny,” Seinfeld blasted Bobcat. “That’s why he had to do that stupid f*cking voice. ‘Cause you have no f*cking act.”

“That’s why he didn’t like me, cause I could actually do it,” Jerry said on the Netflix series. “I can do it. I can do comedy. He can’t.”

Finally, Everett was able to get a word in and told Jerry: “I love him.”

“You can love him. He’s gonna need the love because he’s not gonna get it from the public,” Seinfeld retorted.

Years ago, Goldthwait slammed Seinfeld for dating a 17-year-old girl when Jerry was 38. Bobcat also revealed to the world that Jerry Seinfeld was a Scientologist.

“Here is this creepy Scientologist guy (dating) teenage girls, which I don’t care about one way or another,” Goldthwait told the Spokesman-Review in 1995. “What I find creepy is that people are convinced he lives in that apartment, and those are his wacky friends. They don’t like each other; they’re actors paid to pretend they like Jerry Seinfeld. He’s a weird guy. But everybody thinks he’s normal and I’m weird.”

“I don’t know, man. Sitting around with a bunch of guys, slaving over a new ‘clapper’ joke? For God’s sake. People are gonna think all comics are crazy, because here’s a guy with $450 million, bummed out because he can’t get laughs at an Improv,” Goldthwait told The Baltimore Sun in 2003. “Dude, if it bums you out, don’t go on stage. You’ve got $450 million. You can pay these people to clap.”

As far as Scientology goes, Seinfeld dabbled in the mysterious religion during the 1970s and 1980s. In a 2007 interview with Parade, Jerry detailed his days as a practicing Scientologist.

“I last really studied, oh, it’s almost 30 years ago,” Seinfeld said. “It was interesting. Believe it or not, it’s extremely intellectual and clinical in its approach to problem-solving, which really appealed to me. I actually got to it from my auto mechanics teacher in high school, who was into it, and he was telling me about it.”

“In my early years of stand-up, it was very helpful,” Jerry added. “I took a couple of courses. One of them was in communication, and I learned some things about communication that really got my act going.”

“It was just things about understanding the communications cycle,” the legendary Jewish comedian added. “Even the volume at which I’m speaking now is the right volume for where you’re sitting. I’m almost performing, in a way.”

“They have a lot of very good technology,” Jerry said of the religion best known for having Tom Cruise as a member. “That’s what really appealed to me about it. It’s not faith-based. It’s all technology. And I’m obsessed with technology.”

So there you have it. Jerry used to be a Scientologist and he loathes Bobcat Goldthwait.