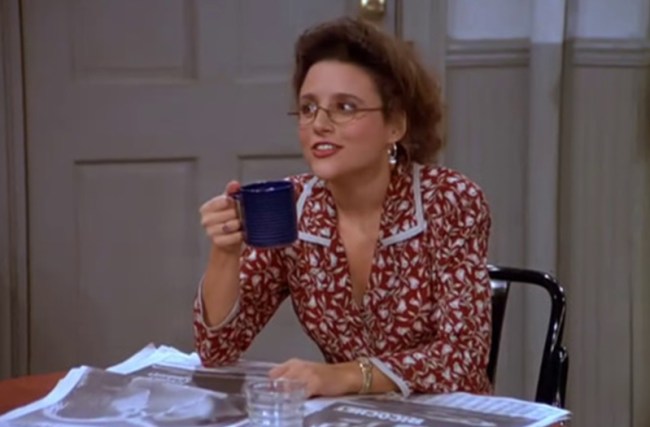 Julia Louis-Dreyfus helped make Seinfeld one of the greatest sitcoms of all-time. But don’t expect to see her character Elaine Benes on TV ever again other than reruns. That is because Julia Louis-Dreyfus shot down any involvement by her in any future Seinfeld reunions.

Louis-Dreyfus has moved on since Seinfeld to star in another hit TV show, the White House comedy Veep. But for many people, she will always be remembered as Elaine Benes from Seinfeld. Veep is currently coming to a close after seven seasons and people are wondering now that she is free if she will be wanting to do a Seinfeld reunion.

In an interview with Porter, Louis-Dreyfus was asked about wanting to bring her character Elaine Benes back to TV screens in a Seinfeld reboot, but she responded that she didn’t want to “sully” the beloved sitcom.

RELATED: Jerry Seinfeld Teases A ‘Seinfeld’ Revival And Says A Reboot Is ‘Possible’

After Veep, the 58-year-old Louis-Dreyfus will star in a dramedy titled Downhill with Will Ferrell that is about a family skiing trip that becomes a reflective experience for them all. “Storytelling is what keeps me motivated,” she added. “A really good story, that you can sink your teeth into and help tell to the world, is, for me, the most inspiring way to live.”

Also in the Porter interview, Louis-Dreyfus revealed how her time on Saturday Night Live was awful. As an up-and-coming young comic, Julia starred in The Second City, the improvisational comedy troupe from Chicago that also churned out Steve Carell, Tina Fey, John Belushi, Dan Aykroyd, Bill Murray, John Candy, and Chris Farley. At only 21-years-old, Julia was selected to be on Saturday Night Live, making her the youngest woman to be cast on SNL at the time.

Louis-Dreyfus appeared on SNL from 1982 until 1985 and called the experience “a huge Cinderella getting-to-go-to-the-ball kind of experience.” However, she also said that the sketch comedy show wasn’t welcoming to her and was “very dog-eat-dog” environment.

“It was so misogynistic and not female-friendly whatsoever,” she said in the Porter interview. “But I was also 21 and unprepared to be there as a performer. A mash-up of those two very negative things made it a hard time, but I learned a lot.” Louis-Dreyfus didn’t harbor too much ill will towards SNL because she hosted or appeared on the show in 2006, 2007 and in 2016.

But, Saturday Night Live is where she met Larry David, who would become the co-creator and head writer of Seinfeld. “Larry was there my third year,” Julia said. “He never got a sketch on the air. We sort of became friends because we identified with each other’s misery.” Five years after leaving SNL, Julia Louis-Dreyfus would become Elaine Benes on Seinfeld and the rest is history.