Millennials Are Complaining That ‘Seinfeld’ Is ‘Super Offensive’ 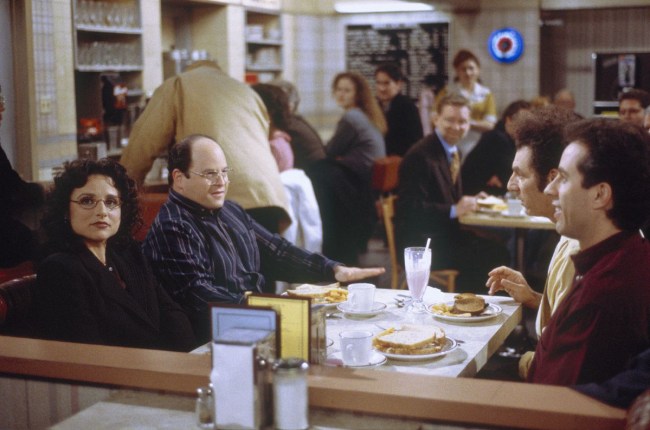 Seinfeld was a show about nothing. And only in this day and age could a show about nothing be deemed offensive, but here we are ¯\_(ツ)_/¯. The website Bustle, which is owned by Bustle Digital Group and “is the largest premium publisher reaching millennial women,” wants you to know that the TV show Seinfeld is problematic.

The article declares: “Thanks to more modern understandings of what political correctness entails — and why being PC is important — it’s less common these days to find jokes like the offensive ones that often played out on Seinfeld.” The comedy created by Larry David and Jerry Seinfeld originally aired from 1989 until 1998 on NBC and has been in heavy syndication on a number of television channels since 2002. The harmless television show that passed NBC’s Standards and Practices as well as never receiving a fine from Federal Communications Commission (FCC) is suddenly a scary program that is so dangerous that it should be banned for all eternity.

The article states that the militant-like chef known as the “Soup Nazi” who can decide to serve you bread or crab bisque is problematic because “groups of Neo-Nazis have become noticeably emboldened” and “using the term ‘Nazi’ to label someone as a joke doesn’t sit so well anymore.”

Oddly enough, Bustle uses the term “grammar Nazi” on at least four occasions seen HERE, HERE, HERE, and HERE. Apparently, Bustle doesn’t understand that the term “Nazi” is nothing to joke about. He or she that is without sin among you, let them first cast a hyperbolic use of a word for exaggeration to get a point across.

The sitcom is extremely diverse featuring Native Americans, Puerto Ricans, Pakistanis, Japanese, and Ukrainians. The author of the article claims that Episode 17 in Season 4 was offensive because “a journalist thinks Jerry and George are in a same-sex relationship and it’s the basis of a whole episode’s worth of bad jokes.” However, the episode in question titled “The Outing” actually won the GLAAD Media Award (Gay & Lesbian Alliance Against Defamation) for having a positive outlook on gay and lesbian relationships. Not that there’s anything wrong with that.

The writer said the 56th episode titled “The Shoes” is toxic because cleavage is bad or something. If it wasn’t for that classic Seinfeld episode we would have never gotten this pearl of wisdom: “Looking at cleavage is like looking at the sun. You don’t stare at it. It’s too risky. Ya get a sense of it and then you look away.”

For some reason, the stealing of a handicapped parking spot in the 22nd Episode of Season 4 is offensive because it is “icky.” That’s the steel-trap reasoning as to why this episode is problematic. Her words, not mine.

The Bustle writer probably took some fantastic work advice from George Costanza: “I always look annoyed. Yeah, when you look annoyed all the time, people think that you’re busy.”

Or maybe the “outraged” writer took this gem from George.

The fake outrage goes on… yada, yada, yada. While the article fails to actually present any real evidence that Seinfeld is problematic, the article did remind me to go on a Seinfeld marathon and enjoy the comedic genius of a very hilarious and very non-offensive TV show.