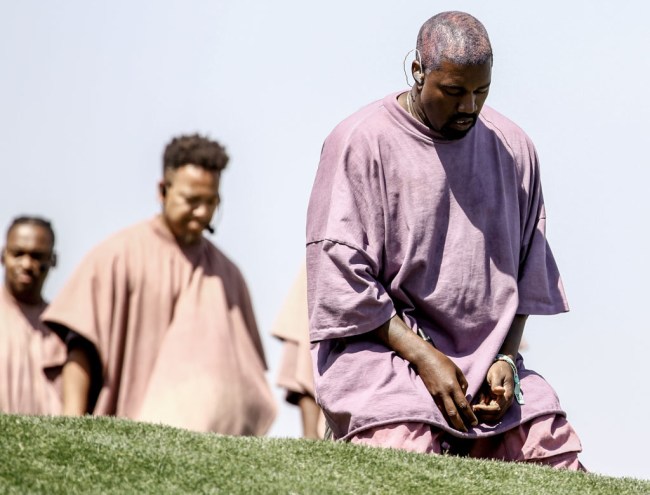 Kanye West was supposed to release his new album titled Jesus Is King on September 27, 2019. However, as of September 30, Ye’s latest LP has yet to be released. That has not stopped Kanye from promoting himself and Jesus Is King with some sensational comments that are grabbing headlines.

The new album is reportedly only 35 minutes long and warns about the evils of the modern world, including Instagram. “Put the Gram away,” Kanye raps on the song Closed On Sunday. Not exactly the advice his wife would like to see since she built an entire empire with the help of Instagram.

On the track LA Monster, Yeezy claims that Los Angeles is “lettin’ Satan run they streets.” Kanye and Kim Kardashian live in the suburbs of Los Angeles.

“It’s the ugliest nightmare born from the prettiest dreams; millions of people trying to get on the scene; and everyone selling their souls, everyone saying they woke, but they sleepwalking, dead, eyes closed,” Kanye raps.

On the track Selah, Yeezus compares himself to Mahatma Gandhi by declaring himself “Yandhi.”

The beats on Jesus Is King sounded fire. He definitely pulled from elements of previous sounds that people loved from WTT, 808s, Yeezus, Cruel Summer & MBDTF and put a gospel spin on them.

Of course I need to hear them again, but they were knocking on the sound system he had

On the upcoming album, rap duo Clipse reunite after ten years on Use This Gospel, which features a ­saxophone solo from Kenny G.

Just heard Kanye’s new album Jesus Is King and saw the accompanying film. My favorite track is the last song and it features the Clipse. Both Push & No Malice. Kenny G is also on it. “New Body” has been cut from the album.

Here is the art pic.twitter.com/u87FLTDhZO

Kanye reportedly announced that he will no longer be making secular music, and will focus on making “only gospel from here on out.” The 42-year-old rapper has been on a religious kick since January when he started doing his weekly gospel-themed Sunday Service shows.

Kanye also announced that he is no longer making secular music. Only Gospel from here on out.

The tracklist for Jesus Is King, the ninth album by the Grammy-winning hip-hop artist, has a religious theme and includes songs:

Coincidentally, on this date in 2003, Kanye released his debut single Through the Wire.

Kanye made a surprise appearance at a Chance The Rapper concert in Chicago, where he told the crowd: “We came here tonight to declare that Jesus Christ is king.”

Kanye performed in front of 3,000 people at the Greater Allen A.M.E. Cathedral in Jamaica, Queens, with a 150-voice gospel choir named the Sunday Service Collective and nine musicians on Sunday. Kim Kardashian and the celebrity couple’s children sat in the front pew of the church.

kanye was going off pic.twitter.com/bte7WTuA5x

The coinciding IMAX documentary, Jesus is King: A Kanye West Experience, is scheduled to be released on October 25.