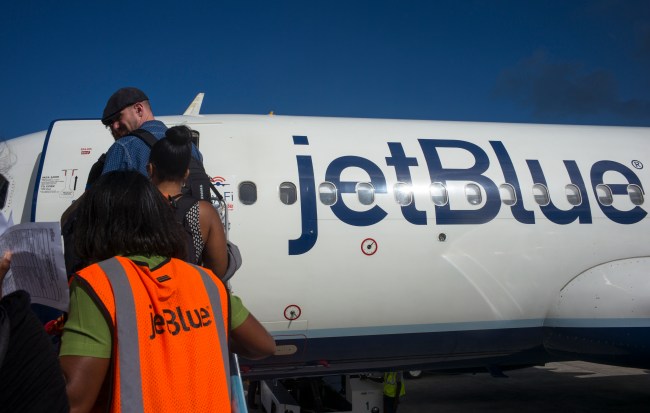 Full disclosure: I’m a big Jet Blue guy. They’re one of the only airlines I’ve never had a problem with. Their prices are fair, in-flight entertainment is top-notch, and they tend to give you another nip of vodka if you ask nicely. And you don’t even have to ride in the overhead compartments like you do over at Spirit.

But I’m afraid I cannot support the abhorrent behavior that was on display Wednesday on a Jet Blue flight from Orlando, Florida to Newark, New Jersey.

A Brooklyn mother named Chaya Bruck was traveling alone with her six children when she was forced off the flight after her two-year-old daughter would not keep her mask on, despite Jet Blue’s policy stating, “Customers two years and younger will not be required to wear a face covering if they cannot maintain one.”

WATCH IT: Family thrown off @JetBlue flight for 2-year-old not wearing mask; when the mother stated she would force the toddler to wear a mask, there were still required to deplane pic.twitter.com/6s7AZqSHd7

“It was horrible, the whole experience was traumatizing,” Bruck told the Daily News from Orlando International Airport, where she and her children were still stranded Wednesday afternoon.

“I was trying very hard…(The other children) were wearing their masks with their noses covered,” she said. “It says (on JetBlue’s website) that a child who cannot wear a mask does not have to wear a mask. I tried to tell them this, but they didn’t care…They wanted me off the plane.

“(The other passengers) were sticking up for me….All of my kids were crying. I was shaking…It was inhumane.”

A further angle video @JetBlue this stewardess must be disciplined. JetBlue's mosaic hotline: 1-877-538-8783 call this number and listen to the first 25 seconds of the automated message and you'll hear the mask policy exempts this kid. Deplane for this? Embarrassing. pic.twitter.com/lxo2klyGrc

Throw a 2 year old baby off the plane because she did not wear a mask. .. targeting identifable Jews

If @JetBlue actually let's their employees harass toddlers and does nothing, I'm happy to switch to a new airline. Because God knows how they treat people with hidden disabilities.

This is absurd. If 2yr Child is not infected and not willing to wear mark. Then they shouldn't be forced.

Has @JetBlue made a statement about the family they booted off a flight because a two year old wasn’t wearing a mask? I have a flight booked in October with you, and a child too young for a mask. If this is your policy, please cancel my reservation. https://t.co/aFoVqOOltV

You can’t spell Jet Blue without an L.