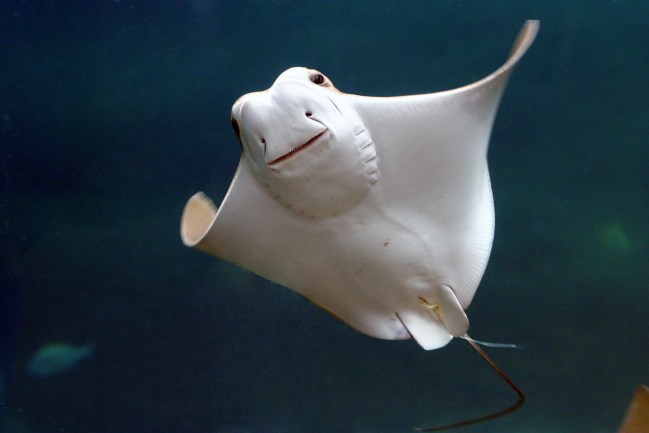 I went Cobia fishing out of Bluffton, South Carolina two years ago. All things considered, it wasn’t the best day of fishing. I managed to catch a decent-sized Cobia myself while the others on the boat reeled in some small sharks but we didn’t spend the whole day fishing because the tides were off and we were constantly running from one spot to the next.

One thing that stuck out to me that day was the flying stingrays. As we’d be running up and down the river we’d see stingrays just randomly leap out of the water like flying fish or dolphins. The first few times I was like ‘holy shit, look at that!’, ecstatic at what I’d seen. By the end of the day, it was old hat. Just a day of stingrays leaping high out of the water.

It’s these same jumping stingrays in Bluffton, South Carolina that nearly killed an 18-year-old bro recently. Levi Dixon is a Jet Ski guide for Sea Monkeys Watersports out of Hilton Head, South Carolina and was knocked out cold by a stingray that jumped out of the water, hit him in the head, and left him unconscious.

Meanwhile, a guy cruising in his boat was passing by when his favorite beer koozie flew out of the boat and into the water. He stopped his boat and turned it around to grab the koozie and spotted the unconscious 18-year-old who’d been knocked out by a stingray. Without that lost koozie he would’ve certainly drowned.

Here’s the story from IslandPacket.com:

Thomas McDaniel of Okatie and his girlfriend, Joanna Whipple of Bluffton, were in a boat nearby and saw the accident happen.
Just before the accident, McDaniel said a koozie flew out of the back of their boat, so they turned around to pick it up. That put them in just the right place to help Dixon, who might have drowned otherwise.

McDaniel said the ray was big. He estimated it was about 4 feet wide and at least 30 pounds.
McDaniel jumped into the water and held Dixon upright while Whipple called 911. When another boater came by, they were able to get Dixon onboard and delivered him to EMTs waiting at a nearby dock.
“If that koozie wouldn’t have flown out,” McDaniel said. “… It’s a miracle he’s alive.”
Dixon said he doesn’t have any memory of the accident.
“I just remember going out on one of the skis to help with some customers that were falling behind,” he said. “ … and that was the last thing I remember, and I woke up in Hilton Head Hospital.” (via)

It’s legitimately a miracle that this bro is alive. Knocked out cold and saved because a guy randomly lost his favorite beer koozie. What are the odds?!

Side note: I’ll be in Bluffton again for a week in July and I’m looking to do some tarpon fishing or just general inshore shark fishing (catch and release, of course). If anyone reading this has suggestions of a dope fishing/charter guide, please shoot me an email to cass@brobible.com or you can hit me up on Twitter at @casspa where I’ll respond almost instantly. Any help is much appreciated! I’ll also take restaurant suggestions for Bluffton and Hilton Head if you’ve got them!

For more on this story, you can visit IslandPacket.com