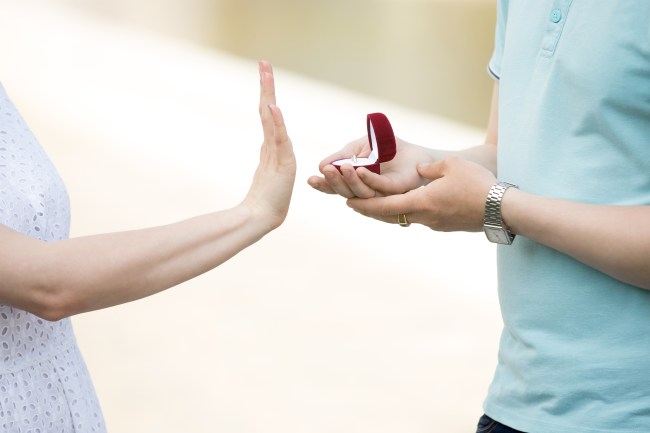 The average American spends $6,324 on engagement rings. That is roughly the price of a 2003 Kia Optima, fully loaded. The only difference is the Optima will undoubtedly get you laid, whereas the ring is basically a promise that you won’t. For the rest of your life.

Granted, there is no price on love, and your lady is likely worth every penny of that 6k, but engagement rings may be the biggest expense in a man’s life that he literally has no idea what he’s actually buying. The whole process is senseless–we go in with a budget and work backwards to find a ring. I could be sold a goddamn Ring Pop if the jeweler was charismatic enough and I wouldn’t know the wiser. It’s a damn shame. THEY ALL SPARKLE!

Daniel Anania, a jeweler in Sydney, Australia, shared a photograph of two engagement rings side-by-side to demonstrate that all that glitters isn’t gold and it’s nearly impossible to determine a real (expensive) engagement ring from a fake (inexpensive).

Which one do you think is of greater value?

Real or fake? Jeweller posts pic of two 'diamond' engagement rings but which one is the genuine article? https://t.co/g0izoxsDFo

If you answered ‘the one on the left’ aka the shiny, better-looking one, congratulations, you’re wrong.

‘The stone on the right is a one-carat brilliant-cut round diamond. It’s colour G on the diamond chart and has a clarity SI2, both important factors that push it’s value up,’ says Anania. The ring on the right boasts a diamond worth AUS $10,950 ($7,776).

Anania, whose family’s owned Anania Jewellers since 1965, offered some tips to employ when searching for a ring.

‘First, feel the weight [of the ring]. Silver is light, gold is heavy and platinum is even heavier.’

He adds you should then ‘ask to see the diamond through a loupe (a small magnifying glass every jeweller should have). It needs to be 10x magnification’.

‘I like S11 and SI2 diamond clarity because the natural inclusions bring the price down, but under magnification you can see distinctive characters that you can’t see with the naked eye.

‘If the stone is too clean inside and is being sold too cheaply – it is probably fake.’

He also explained how most diamonds are laser inscribed with their certificate number so make sure the certificate you are given and the inscription on the ring match.

Orrrr with the money you’re going to spend on a ring, you could just install a beer tap in your home. That way, at least you’ll be drunk when you’re sleeping on the couch.