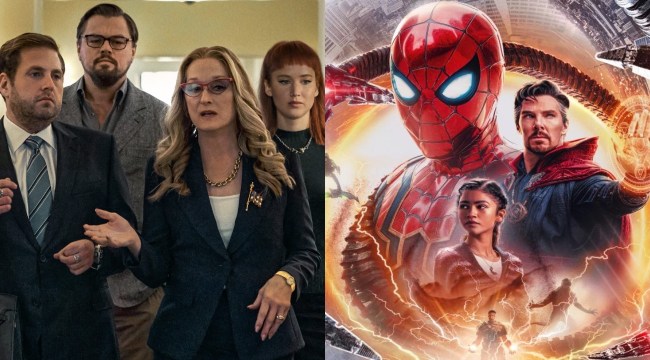 Heading into this year’s Academy Award nominations — which were announced on Tuesday morning — there was a narrative that Spider-Man: No Way Home, given how appreciation for the film was widespread among all different kinds of audiences, should score a Best Picture nomination.

Not only can the argument be made that the movie deserves it, but it would also, undoubtedly, help boost viewership, especially if The Academy figured out a way to get the likes of Tom Holland and Zendaya to host. The ceremony seemingly faces further irrelevance with each passing year and it needs to start to build towards reeling in future viewers, not aging ones.

Despite the mutually beneficial hypothetical, The Academy whiffed and only nominated the film for Best Visual Effects, an award that it will certainly not win on account of Denis Villeneuve’s stunning Dune.

The take that No Way Home should’ve been a Best Picture-nominated film made it all the way up to the late-night talk show circuit as Jimmy Kimmel addressed The Academy’s decision following the announcement. It should be noted that both Jimmy Kimmel Live and the Oscars air on ABC.

“How did [‘Spider-Man: No Way Home’] not get one of the 10 nominations for best picture?” Kimmel said. “Forget the fact that the movie made $750 million [in the U.S.] and is still going. This was a great movie. It wasn’t in the top 10 best movies of the year? There were three Spider-Men in it. You’re telling me ‘Don’t Look Up’ was better than ‘Spider-Man?’ It most certainly was not.”

“Even if you go by the critics’ reviews on Rotten Tomatoes, ‘Don’t Look Up’ got a 46% and ‘Spider-Man: No Way Home’ has 90%. For god’s sake, ‘Jackass Forever’ has an 89%. Why do best picture nominees have to be serious? When did that become a prerequisite for getting nominated for an Academy Award? You wanna know what happened? Voters looked at the list and saw the names Leonardo DiCaprio and Meryl Streep and they checked the box and then they put their kids in the car and went to see the movie ‘Spider-Man.’ And they loved it! But they didn’t vote for it.”

Ultimately, Don’t Look Up is the other side of that coin. While there’s no box office dollar sign attached to the film to quantify its success, Don’t Look Up was viewed for more than 152 million hours in its first week, which is a record high for the most weekly hours viewed for a film on Netflix. Whether we like it or not, that matters in Hollywood these days. Add in the glitz and glam of the cast and the apparent prestige of director Adam McKay — the Academy nominated his previous two films, The Big Short and Vice (which famously was one of the worst-reviewed films to get a Best Pic nod) — and you’ve got a no-brainer contender. Let’s just hope it doesn’t win.

RELATED – ‘Spider-Man: No Way Home’ Almost Featured A Doctor Strange Vs. Mysterio Battle: Here’s The Concept Art To Prove It