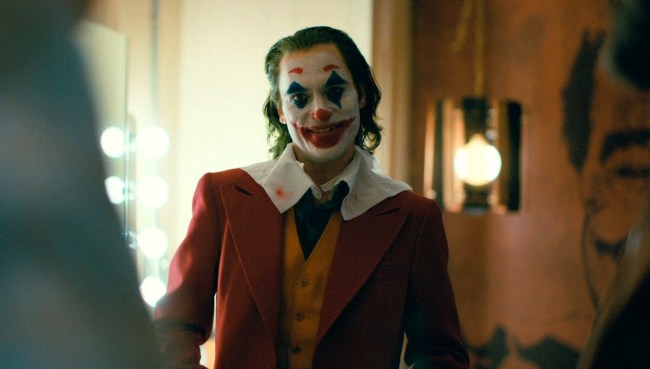 Joaquin Phoenix and director Todd Phillips’ Joker is not only breaking box office records for an R-rated movie, it’s completely blowing them away as it is now on track to bring in over $1 BILLION, and it wasn’t even released in China.

Five weeks after its release, Joker was still ranked number two at the box office, raking in another $14 million, putting it only behind disappointment Terminator: Dark Fate which opened at just $29 million on an estimated budget of $185 million.

Normally these days when a movie that is well-suited to becoming a franchise crosses $1 BILLION at the box office, a sequel is all but guaranteed to be made.

However, Joker director Todd Phillips said prior to the movie’s premiere, “We have no plan for a sequel. We made this movie, I pitched it to Warner Bros. as one movie, it exists in its own world, that’s it. It’s not about worldbuilding, it’s not about other versions, it’s like, here’s our version of the origin story, that’s it.”

Fans would certainly beg to differ. And maybe, just maybe, so does the film’s star Joaquin Phoenix.

Speaking to the Los Angeles Times’ The Envelope, Phoenix certainly left the door to a Joker sequel open, at least a crack.

First, the bad news, “I wouldn’t just do a sequel just because the first movie is successful,” said Phoenix. “That’s ridiculous.”

He also stated, “Part of the whole attraction to me was there was no expectation. I didn’t sign a deal to do [more movies]. It was a one-off.”

On the plus side, Phoenix did admit, “Long before the release or before we had any idea if it would be successful, we talked about sequels. In the second or third week of shooting, I was like, ‘Todd, can you start working on a sequel? There’s way too much to explore.’ It was kind of in jest — but not really.”

So, Phoenix thinks there is enough material for a sequel, but what about Phillips? Can he be talked into doing another Joker movie?

“We haven’t talked about it a ton,” Phillips told The Envelope. “We’ve only talked about the fact that if we ever did one — and I’m not saying we are because right now we’re not — it couldn’t just be this wild and crazy movie about the ‘Clown Prince of Crime.’ That just doesn’t interest us. It would have to have some thematic resonance in a similar way that this does.”

As for all the fan theories about whether Arthur Fleck is indeed the “real” Joker, AKA the supervillain who ends up continuously tangling with Batman, Phoenix says that, at least in his mind, he is, but that isn’t all that matters.

“I mean, to me, yes, he is,” said Phoenix when asked about it, then adding. “There was something that was great about the mystery of it. Todd and I talked a lot about how this is one of the few opportunities that you have where people don’t expect to know the definitive truth of the character — and not only that, they probably don’t want it. Usually the demands of the movie are the opposite. I said, ‘We have to take advantage of that. Why would we not?'”