‘He Told Me This In Confidence’: Joe Rogan Reveals Conversation With Aaron Rodgers; How The QB Made His Controversial Decision 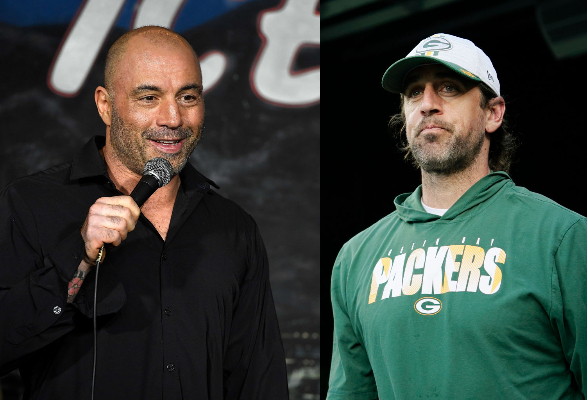 Joe Rogan revealed on his massively popular podcast why Aaron Rodgers was hesitant to get the COVID-19 vaccine. The revelation was made during Monday’s The Joe Rogan Experience episode featuring fellow podcaster and stand-up comedian Theo Von.

Rodgers tested positive for COVID-19 last week, which ignited a whirlwind of controversy since the Green Bay Packers quarterback previously told reporters the factually correct statement that he was “immunized.”

During an interview on The Pat McAfee Show, Rodgers declared that he “consulted with a now good friend of mine Joe Rogan” – who recovered from his COVID-19 infection in a few days after he “threw the kitchen sink” at the respiratory disease, including monoclonal antibodies, ivermectin, z-pack, and prednisone.

“I consulted with a now good friend of mine Joe Rogan, after he got COVID, and I’ve a lot of the stuff he recommended in his podcast and on the phone to me,” Rodgers said.

“I’m going to have the best immunity possible now based on the 2.5-million-person study from Israel that the people that get COVID and recover, have the most robust immunity,” Rodgers explained. “I’m thankful for people like Joe stepping up and using his voice. I’m thankful for my medical squad and I’m thankful for all the love and support I’ve gotten but I’ve been taking monoclonal antibodies, ivermectin, zinc, vitamin C and DHCQ and I feel pretty incredible.”

During the most recent JRE podcast episode, Rogan provided more details of his conversation with Rodgers about COVID-19 treatments.

Rogan said that Rodgers is “getting a lot of hate” over his decision not to get the COVID-19 vaccine.

Von called sports analysts condemning Rodgers as “complete nerds.” The comedian also called Rodgers the “white Kyrie Irving,” another high-profile superstar athlete that has refused to get the COVID-19 vaccine.

“Kyrie Irving is not getting nearly the hate that he is,” Rogan said of Rodgers.

“Here’s the thing about Aaron Rodgers, I can say this now because he’s gone through this whole thing,” Joe Rogan said. “He’s allergic to one of the main ingredients in the vaccine.”

“There’s an ingredient that’s in the capsule…he told me this in confidence,” Rogan said.

“People need to know this. He’s not vaccine-hesitant because he’s a conspiracy theorist,” Rogan said on his podcast.

Rogan revealed that Rodgers is allergic to Polyethylene Glycol (PEG), the polymer used in vaccines for coating Solid Lipid Nanoparticles (SLNPs), and “has been indicated as the principal suspect” for anaphylactic reactions to COVID-19 vaccines, according to Nature. PEG is also an “excipient in non-edible consumer products such as lotion, shampoo, and toothpaste.”

“He’s literally following the CDC’s recommendations on their website. He’s not a dummy, he’s a f-cking smart dude.”

Rogan cited the Centers for Disease Control and Prevention (CDC) – which states that anyone allergic to ingredients in the mRNA vaccine should not get vaccinated.

Joe Rogan proclaimed that athletes should not be punished for not getting the mRNA vaccine, but instead called for treatment: “Give them the god damn monoclonal antibodies when they get sick.”

“And they get better quick and then they have antibodies like you do which makes you more resilient to the virus in the future,” Rogan declared.