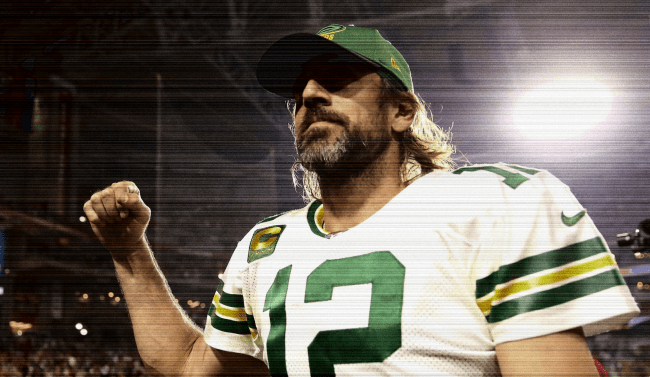 Where to begin? Aaron Rodgers finally addressed his getting infected and his reasoning for not getting vaccinated, while at the same time telling the media that he is “immunized.”

Rodgers said so many things about the virus, the pandemic, vaccinations, the NFL and more that had people scratching their heads and raising their eyebrows during his half hour “diatribe,” as he called it, on The Pat McAfee Show on Friday some of it might have slipped by the average viewer slash listener. (A full breakdown can be viewed here.)

Here is the Cliffs Notes version highlighting the 10 most eyebrow-raising things Aaron Rodgers told Pat McAfee about the situation he now finds himself in (of his own doing).

Before we begin though, if you had any combination of Joe Rogan, Trump, MLK, Ivermectin, Woke mob, Cancel culture, Witch hunt, flat-earther, anti-vaxxer, and Draconian on your BINGO card during the health seminar Aaron Rodgers presented please raise your hand.

On to the quotes…

(1) “It wasn’t some sort of ruse or lie, it was the truth and I’ll get into the whole immunization in a second, but had there been a followup to my statement that ‘I’ve been immunized,’ I would have responded with this, I would have said, ‘Look, I’m not some sort of anti-vax, flat-earther, I am somebody who’s a critical thinker. You guys know me, I march to the beat of my own drum.”

(2) “Now, at the time, they had only had the big three was what they were going to do and if you weren’t in the vaccinated category, you were in a different category which involved some draconian measures and protocols that you would have to adhere to which, in my opinion, were not based on science, they were more based in a shame-based environment to try to get as many guys to get vaccinated as possible so that the league looks better to the rest of the world. That was the focus of these protocols.”

"not based on science but a shame-based environment to try & get as many guys to get vaccinated as possible so the league looks better to the rest of the world." pic.twitter.com/IYSvtqQFyT

(3)“I realize I’m in the crosshairs of the woke mob right now, so before the final nail gets put in my cancel culture casket, I’d like to set the record straight on some of the blatant lies that are out there about me now.”

Aaron Rodgers is blaming cancel culture for him misleading about his vaccination status and then not following league protocols. pic.twitter.com/Ty3rKm2LFT

(4)“When Trump in 2020 was championing these vaccines, what did the left say? Don’t trust the vaccine. Don’t get the vaccine… What happened? Biden wins and everything flips. Shouldn’t that give you a little bit of pause?”

AARON RODGERS: "When Trump in 2020 was championing these vaccines, what did the left say? Don't trust the vaccine. Don't get the vaccine... What happened? Biden wins and everything flips. Shouldn't that give you a little bit of pause?... Isn't this about health, not politics?" pic.twitter.com/z2d9lnIiP5

(5)“I go back to these two questions for this woke mob. If the vaccine is so great, then how come people are still getting COVID and spreading COVID and unfortunately dying from COVID? If the vaccine is so safe, then how come the manufacturers of the vaccine have full immunity? So let’s just step back and realize this vaccine is revolutionary, the things they are doing. However, we don’t know a whole lot about it. And to just say it’s a blanket for all that ails you, in my opinion, is wrong and reckless.”

Related: The Sports World Reacts In Shock To Aaron Rodgers Revealing Why He Misled The Public

(6)“I consulted a good friend of mine, Joe Rogan, and I’ve been doing a lot of the stuff he recommended in his podcasts and on the phone to me, and I’m going to have the best immunity possible now based on the 2.5 million person study from Israel that people who get COVID and recover have the most robust immunity. I’m thankful for people like Joe stepping up and using their voice, thankful for my medical squad, thankful for all the love and support I’ve gotten.”

(7)“They [the NFL] sent in this stooge early in training camp to shame us for being 19th in the league in vaccination rate.”

"They sent in a stooge early in training camp to tell us we were 19th in the league in vaccination percentage.. I challenged some of the things he was saying & afterwards I was thanked by a lot of coaches & players" ~@AaronRodgers12#PatMcAfeeShowLIVE pic.twitter.com/kNI0yQ2mLN

(8)“I have to wear a yellow wristband at all times basically shouting to the world that I’m unclean and unvaxxed.”

Aaron Rodgers “I have to wear a yellow wristband at all times basically shouting to the world that I’m unclean and unvaxxed” pic.twitter.com/m6mbgqv7Ax

(9)“Why do people hate Ivermectin? Not just because Trump championed it, but because it’s a cheap generic, and you can’t make any money off of it.”

AARON RODGERS: "We've given billions of dollars to these pharmaceutical companies. It's not gonna stop... Pfizer is coming out with a pill that is basically the expensive versions of Ivermectin. Why do people have Ivermectin? You can't make any money off of it." pic.twitter.com/J29m4VpIEK

(10)“The great MLK said you have a moral obligation to object to unjust rules and rules that make no sense.”

The full breakdown of what Rodgers had to say, and it was plenty, can be viewed here.

Or just watch this…