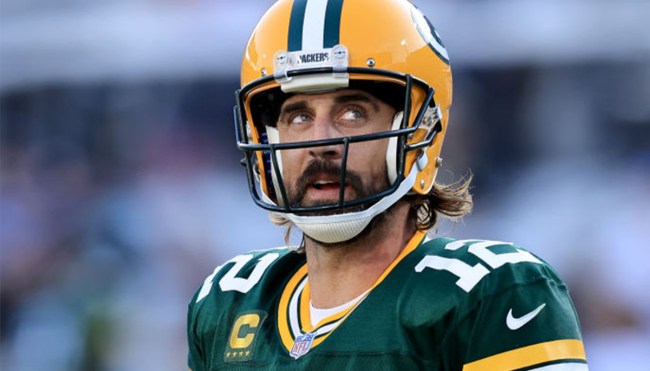 On Tuesday, Rodgers made his weekly appearance on The Pat McAfee Show, and the following day, he found himself at the center of the biggest story in the NFL after testing positive for COVID-19.

It’s been a whirlwind few days for the Packers quarterback, and on Friday, he stopped by the show for the second time this week to address a variety of topics, including why he turned to an alternative treatment, his thoughts on how the NFL has handled the pandemic, and a litany of other issues that will surely provide the people of the internet with plenty of fodder in the coming days.

Keep reading for some clips from the interview as well as a transcript of some of his most notable comments.

Rodgers came hot out of the gate by dropping “woke mob,” “cancel culture,” and “witchhunt” straight off the bat before saying, “I didn’t lie in the initial press conference.”

He then revealed why he didn’t receive an approved COVID vaccine, saying”

“I’m not some kind of anti-vaxx Flat Earther. I am somebody who is a critical thinker…I believe strongly in bodily autonomy.

I put in a lot of time and energy and research and met with a lot of different people in the medical field to get the most information about the vaccines before making a decision. In actuality, it was easy in the beginning to eliminate two of them…I have an allergy to an ingredient that’s in the mRNA vaccine.

My only option was the Johnson and Johnson. At this time, in the early spring, I had heard about multiple people who had adverse events after getting the J&J. Then, in mid-April, the J&J shot got pulled for clotting issues., so the J&J shot wasn’t even an option at that point.

I found that there was an immunization protocol I could do to to best protect myself and my teammates. It was a long-term protocol that took multiple months. I’m proud of the research that went into that. It’s what we felt was best for me.”

Rodgers then turned his attention to how the NFL handled his individual case and was not shy about sharing his displeasure.

"My desire to immunize myself was what was best for my body & that's why this is so important to me. I made a decision that was in my best interest for my body.. I'm not telling somebody to get vaccinated or not get vaccinated" ~@AaronRodgers12#PatMcAfeeShowLIVE pic.twitter.com/AyUkhyvuzC

“I petitioned the league. Initially, they returned and said “No, you’ll be in the unvaccinated category.’ I also said, ‘How come there’s no medical exceptions, religious exemptions, preexisting conditions. They basically said, ‘Look. those are all basically exempted but you’d be put in the non-vaccinated category.’

There wasn’t any way of getting around that in their minds… I said, ‘I’m going to appeal this.” I asked them for time to gather information—I gathered over 500 pages of research on the efficacy of immunizations, all the latest research surrounding my case; everything from mask-wearing to the efficacy of the vaccines and the duration of the antibodies.”

Over the course of the rest of the interview, Rodgers criticized the many NFL protocols he’s been subjected to as an unvaccinated player, played the “If vaccines work then why are people still getting COVID?” card, criticized “every member of the left” for changing their tune on vaccines developed while Donald Trump was president following Joe Biden’s election, and revealed he’s consulted with Joe Rogan and is following the same treatment regimen the podcast host turned to after he was diagnosed.

"Everyone in the organization knew i wasn't vaccinated.. people in the media knew it & they sat on it for months" ~@AaronRodgers12#PatMcAfeeShowLIVE pic.twitter.com/32MSmwNyPd

"This vaccine is revolutionary however we don't know a whole lot about it. For the media taking shots at me you now know my story so quit lying about me.. personal health decisions in my opinion should be private" ~@AaronRodgers12#PatMcAfeeShowLIVE pic.twitter.com/CxovoT7Icw

"They sent in a stooge early in training camp to tell us we were 19th in the league in vaccination percentage.. I challenged some of the things he was saying & afterwards I was thanked by a lot of coaches & players" ~@AaronRodgers12#PatMcAfeeShowLIVE pic.twitter.com/kNI0yQ2mLN

"The situation that I'm in should be a conversation not a controversy.. if this was the flu I'd be playing on Sunday" ~@AaronRodgers12 #PatMcAfeeShowLIVE pic.twitter.com/zDnAyDIxpa

Rodgers was also asked to share details of the specific holistic treatment he received but neglected to elaborate, saying, “The opportunity to do this homeopathic stuff; the specific protocol I’m going to keep between doctors and myself. It was a way to stimulate my immune system against COVID.”

As you’d expect, reactions to the interview have already begun to flood in, and it’s safe to assume we’ll be treated to many, many more in the coming days.