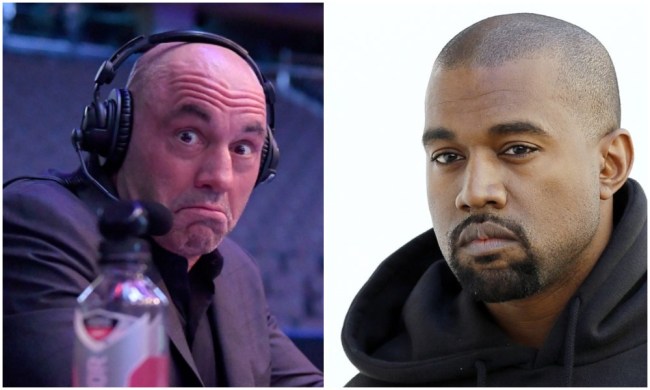 As the saying goes, heavy is the head that wears the crown.

I can’t imagine the pressure Joe Rogan feels every day as the most popular podcaster in the world and all that goes with it, from Spotify drama to juggling the expectations of politically-motivated guests just because they want to capitalize on the audience reach of his platform.

There’s a double-edge sword that comes with being as big as Rogan is: On one hand, you get to use your platform to broadcast thoughtful conversations, searching for knowledge and deeper truths about the human condition and the universe. You’re getting paid millions and millions of dollars just to talk with your friends in the guest chair.

On the other hand, being consistent with your message is hard when you have thousands and thousands of hours of conversations in the archives.

Last week, Joe Rogan released an episode of the Joe Rogan Experience with Kanye West as the guest. Kanye was tweeting Rogan about going on the show for months. With the rapper on the ballot for President, the time was right for a trip to Rogan’s new red pill studio in Austin.

The freewheeling conversation covered all sorts of Kanye-isms, including why he’s running for president, his career struggles in the music industry, his work as a fashion designer, his Sunday church thing, and some absolutely trash takes on the Star Wars universe.

Some long-time JRE fans, however, felt that Rogan was kowtowing to Kayne in the interview. He only challenged the rapper a couple times throughout the course of the interview, mostly letting Kanye riff, completely unfiltered.

He also applauded Kayne for thinking on different layers, outside conventional wisdom.

To show Rogan’s inconsistency on all things Kanye, one YouTuber, Crying Shark, dug into Rogan’s archive to show all the times Rogan has trashed Kanye. The video accuses Rogan of being “fake” with the rapper as a guest and feeding into his ego.

This has obviously struck a chord with Rogan fans:

Joe Rogan is the biggest chameleon on the internet, how are people only just now seeing this? I remember when he had Tyson Fury on and had a deep conversation with him about his personal problems and the very next day had some guy on who was just rinsing him as the ‘mental health guy’. That’s just one other example, Rogan is a snake and the footage there for all to say if see if they open their eyes.

A couple highlights in the video from old Rogan shows, showing Rogan’s inconsistency:

On one hand, yes – Videos like this show inconsistency and hypocrisy. On the other hand – it’s so easy for armchair fans and Internet trolls to play “gotcha!” by combing through old material looking for exactly that. A Socratic quest for truth on isn’t a binary thing – Like organisms in the natural world, one’s opinions also grow, mature, and change.

People change their mind: On other people, on topics, on themselves.

I don’t see a big issue with Rogan softening his takes on Kanye to his face, in polite company, so he can have an amicable guest on his show.