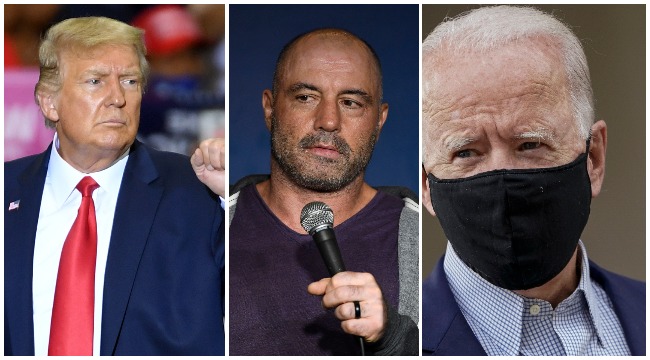 Social media overwhelming disliked how Tuesday night’s debate was managed but there’s one thing many agreed on and that was that Joe Rogan would have done a better job than Chris Wallace moderating the debate.

A few weeks ago, Rogan floated the idea of moderating a 4-hour debate between Trump and Biden during an interview with Tim Kennedy.

“First of all, I want no one else in the room, just the three of us, and you’d have to stream it live so no one can edit it, and I would want them in there for hours,” Rogan said.

“If they wanted to do that – they both wanted to come here in Austin, sit down and have a debate – I would 100% do it,” he continued.

During Tuesday night’s debate, Rogan started trending on Twitter due to the fact that people on both sides of the aisle were dissatisfied with how Fox News’ Chris Wallace moderated the debate.

Joe Rogan would have handled that debate much better than Chris Wallace!

Regardless who you’re pulling for, I think we can all agree that Joe Rogan would do a much better job moderating this thing than Chris Wallace. #Debates2020

According to a poll conducted by The Hill, 69 percent of registered voters said they would watch a Presidential debate moderated by Rogan. 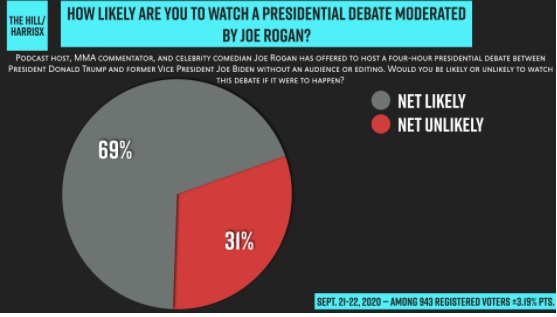 Sixty-nine percent of registered voters in the Sept. 21-22 survey said they are either very or somewhat likely to watch if it were ever to happen, while 31 percent said the opposite.

Men were 9 percentage points more likely than women to say they would likely watch a debate moderated by Rogan, at 74 percent and 65 percent, respectively.

Republican respondents were also more likely than Democrats or independents to tune in to the debate if it were to happen.

A debate moderated by Joe Rogan couldn’t be worse than the shitshow that we witnessed on Tuesday.