The Internet Reacts To Speculation Over Joel Osteen’s Lavish Lifestyle 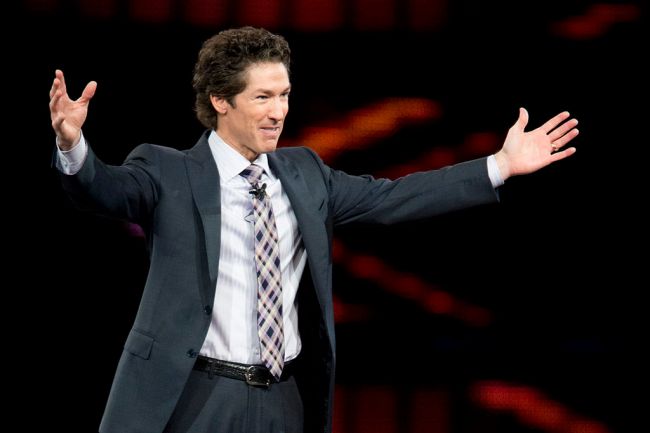 UPDATE: It’s since been reported by Snopes that claims about the pastor’s exotic car collection are speculation. A set of photographs supposedly showing a $325,000 Ferrari 458 Italia have NOT been verified.

For be it for me to criticize a man for making dollars when the highest earner on YouTube is a 9-year-old who opens toys. But the culture has shifted its view of the mega-rich from aspirational beacons of success to deplorable greed-mongers, especially regarding those who barter in the humble service of God.

In the eyes of the internet, mega-church preacher Joel Osteen’s similarities with Jesus start and end with their good head of hair.

Jesus lived an ascetic life, dressed simply, didn't own a home, had few material possessions, slept out in the open desert, moved constantly from place to place preaching the Word.
This is how "Christian" Joel Osteen lives. https://t.co/nllrtIct8i pic.twitter.com/7EE20abSJ1

The 58-year-old has gone viral on Monday after his astronomic net worth, estate and flashy Ferrari surfaced on Twitter. The outrage came in the wake of news that his Lakewood Church received a $4.4 million PPP loan, the third highest handed out in Houston in July and August, according to the Houston Business Journal, with the hashtag #TaxTheChurches trending on Twitter soon after details of Lakewood’s bailout loan was publicized.

I thought God wanted people who are as wealthy as you Joel Osteen, to help the poor not help themselves? @JoelOsteen

This tweet about gifts coming from a divine power did not help his case.

Osteen is reportedly worth north of $40 million.

Remember that one time Joel Osteen helped the poor instead of himself? Yeah, me neither.

I’ll never understand how people buy whatever Joel Osteen is selling. The prosperity Gospel is dangerous and telling your constituents that the more they give to the church the more they will be blessed is literally not what Jesus stood for. Jesus helped others, not himself.

I remember when Texan’s were freezing to death and it took a public shaming for Joel Osteen to open the doors of his mega church to help them.

Somewhere on a 325-foot mega-yacht, Jeff Bezos is breathing a sigh of relief while sipping on the sweet nectars of human blood.