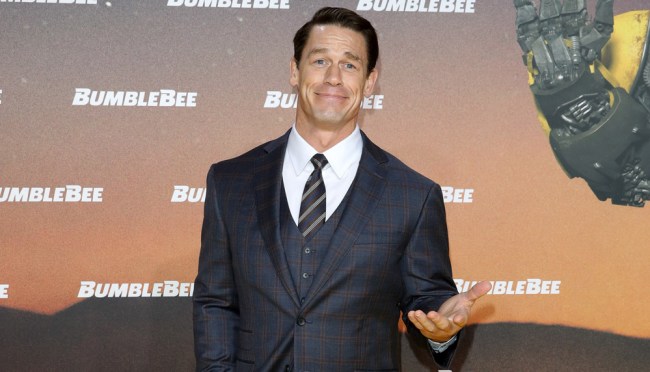 One month ago, WWE Superstar John Cena hinted in an Instagram post that he might be the next person to play the iconic role of Captain America. This made people on the internet very upset.

Much of that reaction was fueled by the fact that Chris Evans strongly suggested that he was done playing Steve Rogers in the Marvel Cinematic Universe. Something he and Avengers director John Russo have since walked back a bit.

IS CHRIS EVANS REALLY HANGING UP HIS SHIELD? #Avengers co-director #JoeRusso says #ChrisEvans might not be gone for good… and explains why he likes to shock fans, as he works to finish the #InfinityWar sequel. pic.twitter.com/9NVzk0PjhV

That hasn’t stopped Cena from continuing to feed the trolls as during his appearance on Ellen this week, DeGeneres “just happened” to bring up the rumor that he might be playing the next Captain America.

“Really? For real?” Cena pretended, pumping his fist when Elle asked him about the rumor. Finally, it’s happened.”

Then he actually had the nerve to ask Ellen, “Who started this rumor?”

“If it’s out there, if the Captain America people are listening, and you’re out there watching right now, I’ll totally do it,” Cena said to the camera. “I totally will,” he said. “I think I’d be a good Captain America. And I’ve already ruined everybody’s childhood, so it can’t get any worse.”

Well, at least we still have Aven… I’m sorry… I just can’t get past his hair.

And apparently, neither can Ellen.

As for those Captain America “rumors”…

I do not want John Cena as Captain America!!!!

No one wants John Cena as Captain America.

Dear @JohnCena
I love you man to death. You’re my favorite wrestler ever but please, for all nerds across the nation, do not try to take the role as captain America man.

YOU WILL NOT PLAY IT WELL. Sorry but it’s true. Have a great day

@JohnCena as Captain America? I’d rather see the character disappear like ash

But how do you really feel about Cena playing Captain America?