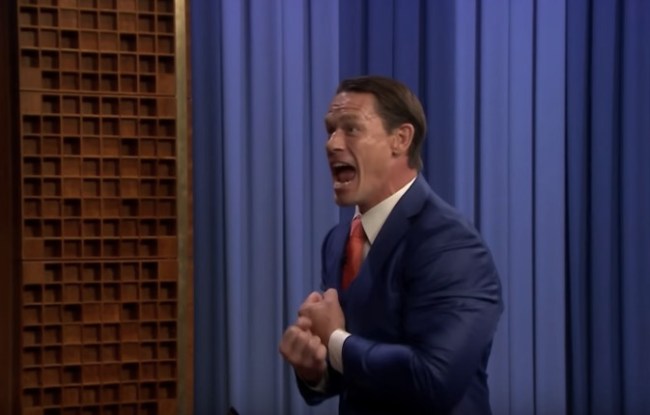 John Cena’s the man. He has a ton of haters out there in the world of wrestling after playing a heel in the WWE for virtually his entire career, but away from the ring he’s granted more Make-A-Wish Foundation ‘wishes’ for sick children than anyone else in history. He’s just a great guy.

In the ring, John Cena‘s known for his ‘Five Moves Of Doom’ which include these five finishing sequence moves: Flying shoulderblock, sitout hip toss, side-release spinout powerbomb, Five Knuckle Shuffle (fistdrop), Attitude Adjustment (Fireman’s Carry Takeover). He’s well known for these moves and he’s been busting them out in the WWE for the past 16 years.

As a guest on The Tonight Show Starring Jimmy Fallon last night, John Cena revealed that he’s created a sixth ‘Move of Doom’ with the help of legendary martial artist and actor Jackie Chan. John’s been filming a movie with Jackie Chan in China which also explains his extreme dad haircut at the moment.

Some people are calling John Cena’s new hairstyle his ‘mid-life crisis hairdo‘ and it sent Twitter and Instagram into a total frenzy after he first appeared with the greasy middle-part straight out of the 1950s.

John’s been making the TV show rounds lately and has talked about fans telling him how the new haircut’s ruined their lives, and how it’s the worst thing to ever happen to them. For that reason alone, I think John Cena should keep the hair.

He knows everyone’s laughing at his hair, he’s even sharing memes about it.

Here’s John Cena displaying his Sixth Move Of Doom (at the end of the clip) and explaining why his hair looks like a Depression-era child from Illinois whose mom cuts his hair.

Essentially, the move is a ‘lightning’ punch to the face. It’s nothing crazy, but it’s a move that fans can expect to see frequently in the WWE ring.

Is it a total game changer for John Cena? Absolutely not. Was it time for him to add a new move to his finishing sequence after 16 years of the Five Moves Of Doom? Probably. He’s not The Undertaker. He doesn’t have the greatest finishing move in the history of wrestling so he might as well keep it fresh.

For anyone wondering how to spell that Sixth Move Of Doom, here you go. John’s shared the name on his Instagram page.