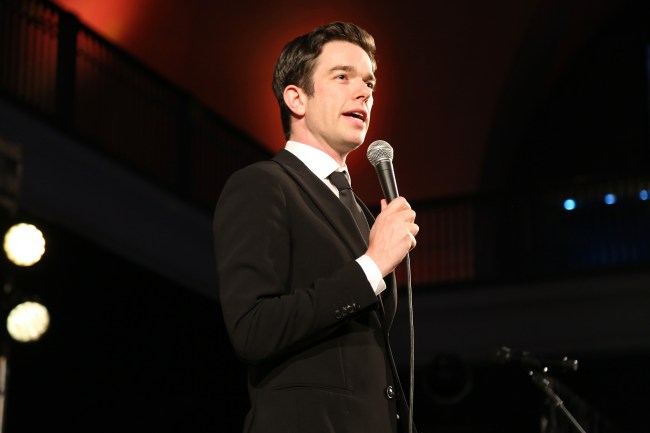 John Mulaney went on Kimmel and told the story of how a joke from his February SNL monologue landed him in hot water with the secret service:

The comic and former SNL writer hosted the show twice this year, the first time in late February. In the monologue, he made a joke about it being a leap year, a practice that was started by Julius Caesar, “and another thing that happened with Caesar is that he was stabbed to death by a bunch of senators because he went crazy.”

The agent vetting Mulaney was “understanding that the joke had nothing to do with Donald Trump,” Mulaney explained, adding it was clear he was not a threat. Still, the comic was asked if he had any rants or “manifestos” about Trump online, Mulaney told Kimmel.

“I said, ‘No. I have bad writing habits. I could never pound out a manifesto,'” Mulaney quipped. “I was cleared by the Secret Service — I’ve been told.”

And here’s Mulaney telling the story on Kimmel:

Now, here’s the thing: this exchange summoned a 40% semi-chub America boner for me. Not a full inflation, but definitely a half mast, commemorative, swelling salute to our glorious nation. Why? Because this scenario plays out very differently in a lot of countries around the world. Here, we have celebrated comedian John Mulaney playfully recounting his exchange with the secret service over the time he gently, jokingly inferred that senators should stab the president to death.

Do you know how such a joke plays out elsewhere? Here are a few examples:

In Azerbaijan, a joke that “humiliates” the honor and dignity of the president is punishable by up to two years of corrective labor. In Lebanon, you might get hit with a casual $66,400 fine for taking shots at the president or the republic. In Iran, you could receive 74 lashes for insulting any of the leaders of the country. And if you think these medieval punishments are only found in countries with questionable human rights records, check out the Netherlands—where insulting the king might land you five years in prison (From PRI.org. Quick note: this article is from 2014. It’s entirely possible these countries have since updated their penal codes. But for the sake of comedy, we’re sticking with their research.)

These days, comedians love to gripe about the growing sensitivity of their audience, the diminishing territory of what is acceptable to joke about thanks to the blue checkmark overseers of wokeness. But it’s never a bad thing to remember that it could be a LOT worse. We still live in a country where you can make death threat jokes about the president. Kathy Griffin might disagree, but she also didn’t get 74 lashes and a prison sentence.

Here’s to America, John Mulaney, and making fun of our leaders.