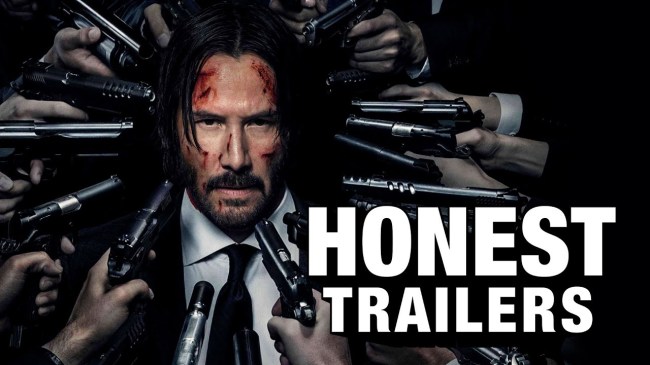 Every time I write about John Wick, I make sure to point out how offensively wrong I was about the franchise’s prospects.

The first John Wick film came out back in 2014, which was my senior year of college down at Rutgers University in good ole New Brunswick, New Jersey. While I wasn’t a plugged into the entertainment industry as I am now, I still (foolishly) believed I had a solid grasp of what would and would not be a successful movie. And back then, I remember wondering to myself: “Who’s asking for an assassin film from a no-name director and a washed-up Keanu Reeves?” Oh, how hilariously wrong I was.

Fast-forward six years and a case can be made that John Wick is the best pound-for-pound action franchise of the 2000s thus far, as every movie seems to be better than the last.

Still, just because the John Wick franchise is nearly perfect does not mean it’s beyond reproach, as the always-excellent Honest Trailers recently set their sites on Chapter 2 and Chapter 3: Parabellum.

The still-untitled fourth film in the John Wick franchise is set to begin production in June ahead of its scheduled May 22, 2022 release date. John Wick 5 was originally supposed to film consecutively with John Wick 4, however, due to the COVID-19 pandemic, those plans have since changed. At this time, it’s unclear when John Wick 5 will begin filming. There’s also the spinoff series based on The Continental hotel in the works, which will consist of three, 90-minute episodes and will focus on a young version of Ian McShane’s Winston character.