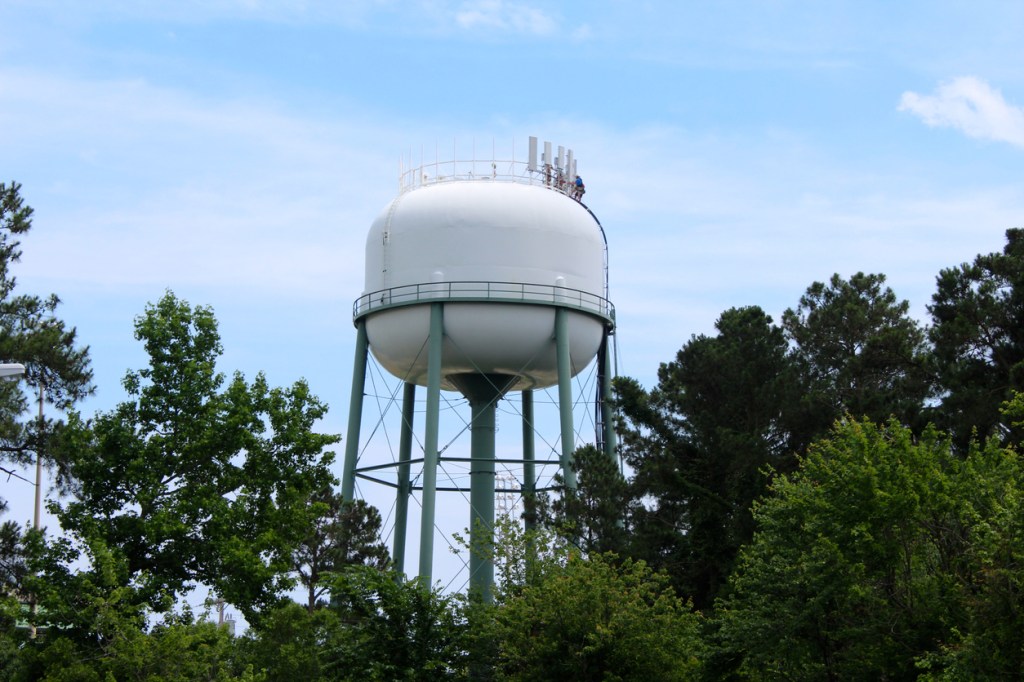 There isn’t much going on in the town of Kingsland, Arkansas. It is a tiny town in Southeast Arkansas that’s home to about 500 residents but it’s famously the birthplace of American music legend Johnny Cash.

In Kingsland, there’s a post office dedicated to Johnny Cash along with other tributes throughout the town including a ‘Man in Black’ mural on their water tower. I’ve never been there and the only reason I know about this water tower is it’s recently gone viral after an expertly placed bullet hole.

Someone shot a bullet into the Man in Black mural of Johnny Cash in Kingsland’s water tower and it penetrated through right around his crotch. The resulting silhouette makes it look like the Johnny Cash mural is pissing on the town and it’s been going on for over a week. Here’s a local news report with A++ puns of the peeing Johnny Cash water tower mural that’s got millions of people laughing.

The bullet could’ve been a few inches lower and centered but maybe they know something about Johnny Cash that the rest of us don’t? It is, after all, his place of birth. But the silhouette is perfect from a slight angle with the appearance of Johnny Cash taking a big ol’ pee pee on the tiny Arkansas town.

This is one of those stories that IMMEDIATELY grabbed my attention as a reminder that sophomoric humor is and will always be funny. I see a ‘water tower looks like it’s pissing’ story and that’s just funny to me.

I don’t care if that makes me immature. I’ve accepted my immaturity shortcomings decades ago. This is funny. Johnny Cash peeing on an entire town for over a week because the water tower has a 50,000-gallon tank is absolutely hilarious.

"The water tower in Kingsland, the birthplace of Johnny Cash, bears a painted silhouette of the famous Man in Black — but an unknown person recently took careful aim at Cash’s crotch and pulled the trigger,” pic.twitter.com/jG3QvEfh1u

Someone shot a hole in a water tower in Kingsland, Arkansas paying tribute to Johnny Cash.

This is an interesting question:

It appears the Johnny Cash water tower has sprung a leak 😎

What Gun Would Do That Damage?

So I found an old Reddit thread about how thick water towers are. The top comment says “3/8” to 1/2” with a total of around 10-15 mils of potable water epoxy liner.” So you’d need a caliber powerful enough to penetrate 1/2″ and then the epoxy liner.

At about 100 yards, a .308-caliber rifle would penetrate 1/2″ steel. It’s unclear where the shooter was firing from but I have to assume they used a rifle and a scope to get it so close to Johnny’s groin.