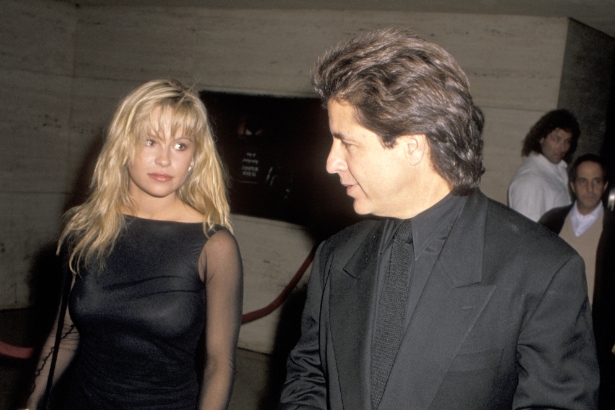 Jon Peters seems to have gotten over his marriage to Pamela Anderson that disintegrated in only 12 days. The hairdresser turned multimillionaire producer has already gotten engaged to another woman in three weeks since his marriage to Anderson flopped.

According to a report by US Weekly, Peters got engaged to Julia Bernheim. The source of the story said the news of the engagement came last Thursday, when Neptune Wellness CEO Michael Cammarata rang the NASDAQ Closing Bell. Peters attended the event as a guest of Cammarata and is an investor in Neptune Wellness.

This is only three weeks since the 52-year-old Baywatch beauty and the 74-year-old Hollywood producer announced their split after only being married for 12 days. They broke off the marriage through a series of text messages.

However, a report said that Peters is not with Julia Bernheim, but actually with the woman who he dumped to marry Pam. According to the Daily Mail, Peters is back with 34-year-old Julia Faye West, who he was dating before getting temporarily hitched to Pamela Anderson. Peters was reportedly engaged to West before getting engaged to Anderson.

Peters has been married four times, so Jonny boy subscribes to the “if at first you don’t succeed, try, try try, try again” mindset.

“Dear Pammy. These past nine days have been a beautiful amazing lovefest. What I’ve realized is that we are really good friends and have been for a very long time. This whole marriage thing with lawyers, debt…has scared me. It made me realize that at 74 I need a simple quiet life and not an international love affair. Therefore I think the best thing we can do is that I’m going to go away for a couple days and maybe you need to go back up to Canada. We did it. The world knows we did it and I think now we need to go our own separate ways.”

“Needless to say that when she texted me that she wanted to get married, it was kind of a dream come true even though I was engaged to someone else and the lady was moving in,” Peters wrote. “I dropped everything for Pam. She had almost $200,000 in bills and no way to pay it so I paid it and this is the thanks I get. There’s no fool like an old fool.’’

Jon Peters has a net worth of $300 Million, which is pretty miraculous considering he has been divorced four times and is paying off the debt of people he is married to for 12 days.