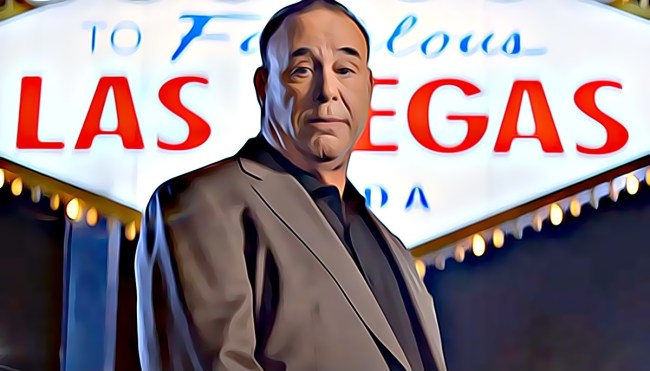 The show’s famously no-nonsense host got his first taste of the hospitality industry while working at a bar to support himself in college. That job would mark the start of a wild journey that saw him managing famed music venues in Los Angeles and operating a nightclub that was home to Sylvester Stallone’s least favorite robot before deploying the wealth of knowledge he’s amassed at the helm of a program that’s still going strong almost 10 years after its first episode premiered.

It’s safe to say Taffer didn’t see the past decade playing out in the manner that it did. “I thought I’d do a pilot and go home,” he recently told me while we were sitting in the back of the “Mobile Command Center” that’s replaced the black SUV where he’s traditionally done surveillance prior to the filming of a season of Bar Rescue unlike any to come before it.

Our sitdown in the decked-out HQ took place in an alley behind the last of the 10 watering holes in Sin City that were tapped to receive Taffer’s signature treatment in the wake of the pandemic. He’d just treated the bar’s employees to their first look at their revamped establishment, and a wall of screens provided us with a live feed of their awestruck reactions to the overhauled interior as he reflected on what led up to the moment:

“We had to do a season. I just felt like I couldn’t do anything normal because what was going on was so abnormal.

Las Vegas was hit harder than anywhere. We had 35% unemployment. We have a singular economy here. The hotels shut down—they were fucking boarded up—and it was so desolate here. People were riding bicycles on the Strip.

I said, ‘This is a city that deserves to be rescued.’ So I convinced the network to let me do it here. This is my hometown. This was personal.”

I’d flown out to Vegas for a much-needed break from reality a few days before our chat only to discover I’d arrived just in time for the final week of filming. I have never been above shooting my shot by sliding into a famous person’s DMs, and after passing a COVID test and agreeing to the strict protocols that allowed a monthslong undertaking to go off without a hitch, Taffer was kind enough to let me stop by the set to live out a personal dream and shed some light on the whirlwind he was on the verge of finally emerging from:

“This has been a heck of a 10 weeks. All year, we’ve talked about the pandemic and how it’s affected the industry. Doing Bar Rescue was the first time I really saw how it affected people.

It was fucking heavy. There’s one episode where the owner’s family lost their house three days before we got there. I put them all in a hotel, but before that, they were sleeping in this room above the restaurant. Four young boys on a wooden floor.

A week later, somebody else had lost their house. At the next bar we went to, all the employees lost their cars and apartments. They were carpooling to work. It made you really see the personal aspect of it.”

I’d rolled into town just a couple of days after the debut of what I assumed was going to be A Very Special Season of Bar Rescue—which is what Taffer was also bracing himself for prior to arriving at the first location.

“I thought this was going to be like a hurricane episode. These people didn’t cause their demise. I’m not going to scream at them because the government shut them down. It created a whole different feeling going into things.”

While it’s obviously impossible to ignore the circumstances surrounding the new episodes, I was relieved to learn we’d been spared a dramatic shift in tone thanks to Taffer’s insistence to emphasize the future and a transition back to normalcy as opposed to dwelling on the pandemic-riddled past:

“What I wanted to try to do this season was get rid of the pandemic right away.

When I went in to do the first episode, the guy had lost his house. He ran up his credit cards to pay his employees, who were over-pouring, which means they were stealing from him. It was ridiculous. So I’m still seeing that there are villains. There are still stories to be told that aren’t all pandemic-based.

We come in and say, ‘OK, the pandemic shut you down, but you could’ve saved more money by doing this or doing that.’ I need to make them admit that they could do better without shaming them.

There’s more nuance this season. I can’t be as direct as I normally am, but there are a couple of times I got pretty heated.'”

The new episodes are littered with the obligatory b-roll of flashing signs and footage of the Strip, but Taffer was also determined to use his platform to call attention to the real Las Vegas; the bars and restaurants that largely cater to the locals who serve as the heart and soul of the place he calls home (and many of which are worth making the trip to based on the fantastic experiences I had at them).

Bar Rescue had filmed its 200th episode a few weeks prior, an achievement that isn’t lost on Taffer, who said, “The first season was ten episodes. The second season was ten. The third season was 30. The fourth season was 50. But after every single one, I never thought we’d come back for more. It’s been unbelievable.”

It’s impossible to count how many other shows have come and gone since the first episode premiered, but Taffer seems to think he knows why it hasn’t lost any steam:

“I’ve made a lot of friends in the television business. I really respect the audience. I don’t do anything fake because I’m afraid they’re going to catch me. I don’t believe I can bullshit the audience. I think they’re smarter than that.

I’m pressured to keep everything real all the time. I look at some other shows I won’t name that obviously aren’t real, and they’re gone in two seasons. I think the reason we’ve lasted so long is because we’re authentic, and I think that people know it.”

Taffer may have a reputation for being an intimidating force thanks to the fiery personality he routinely unleashes upon people who embrace excuses instead of solutions. However, anyone who’s routinely watched the show knows he’s simply incredibly well-versed in the art of tough love and that what is often interpreted as anger is really his palpable passion for helping the people who need it most.

That’s a major reason why the new season works as well as it does despite the unique circumstances surrounding it. It’s also a trait reflected in the two episodes he says he looks back on more fondly than any of the others he’s done:

“Puerto Rico sticks out more than any other. There was also Big Mike in New Orleans after the flood. Big Mike was heavy. His kids were living at someone else’s house. I was able to get his family back together, and that really meant a lot to me.”

Taffer has also encountered plenty of characters over the course of his travels. I’m personally partial to the man, the myth, and the legend known as Rick Roundhouse, but there’s one owner who comes to mind when you ask him about the most memorable person he’s crossed paths with:

“There’s one person that immediately pops into my head several steps ahead of everyone else: One-Eyed Mike. He was truly something else.

One-Eyed Mike lost his eye in a sword fight while playing pirate. You can’t write that.

What didn’t make the episode is that I made him a Louis Vitton eyepatch. I was trying to stop him from being so pirate, so I thought a Louis eyepatch would help. He wanted nothing to do with it.”

I couldn’t let our conversation end without asking the question that’s been on a lot of people’s minds over the past few years: will Jon Taffer run for office?

It seems like a pretty natural progression for a man who first started working at bars to sustain himself while getting a degree in political science and who has decades of business acumen at his disposal, but based on what he told me, he seems perfectly content with his current situation.

“I have thought a lot about it over the years. I’ve been asked to. I’ve gotten calls from political parties. I’ve looked at state office and I’ve looked at national office. I just don’t think it fits into my life at this time.

I’ve been told I could win. I don’t know if I want to. I came very close to doing it last year to the point where I went to Washington, D.C. to do research. I was looking at the Congressional Third District here in Las Vegas. I’ve also looked at running for Senate in 2022.

The political consultants have come in and they’ve shared the numbers with me. They’ve shown me where I can win. I don’t fit into any political party. I tend to be a little conservative, but I’m pro-gay rights. I’m pro-women’s rights. I’m just sort of in the middle.

Our career politicians aren’t delivering for us with the kind of sensitivity that business owners and locally-focused people like me would. There are times where my wife says I really should run, because it’s sort of a responsibility.

I don’t think Taffer ’22 is going to happen. But I did have fun on April Fools’ Day.”