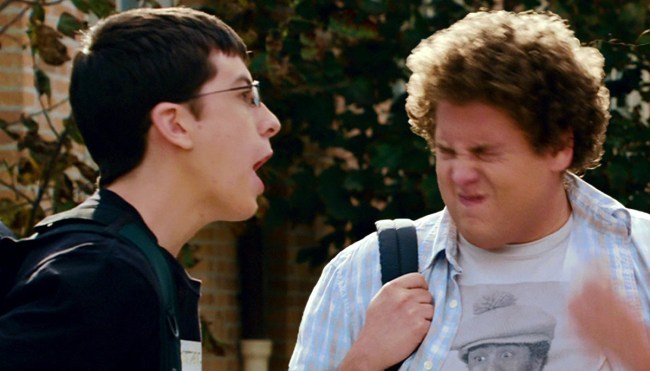 Hollywood had a long history of pumping out films that attempt to capture the essence of the high school experience, and you can tell a lot about a person based on the movies they identify with the most.

For example, many students who came of age in the 1980s will likely relate to the cultural ecosystems John Hughes explored in The Breakfast Club and Pretty in Pink, while those who endured the most awkward phase in life in the ’90s will probably cite Clueless and or 10 Things I Hate About You.

However, things get a bit murkier when you get to the turn of the millennium. There are undoubtedly some people out there whose high school years were defined by the wanton debauchery at the core of American Pie, but they’re in the minority compared to those who connect with Mean Girls or the one title that arguably defined that generation of students (and perfected the art of the high school movie as we know it): Superbad.

Superbad was a hit with critics and audiences alike when it hit theaters in 2007 thanks in no small part to the painfully relatable approach it harnessed; Jonah Hill’s Seth and Michael Cera’s Evan are both card-carrying members of the Uncool Crowd, a tier of the high school caste system that sits just above the one occupied by the former’s favorite punching bag: McLovin.

The wild ride McLovin endures in Superbad is fairly analogous to the journey Christopher Mintz-Plasse embarked on when he landed the part, as the actor was still in high school when he landed the first role of his career (and the one that will almost assuredly define it).

It’s safe to assume Mintz-Plasse drew from the awkwardness and anxiety that came with stepping onto a movie set for the first time while filming the movie—and based on what Judd Apatow and Seth Rogen had to say in a Superbad oral history that was recently published by Vanity Fair, he probably wasn’t the only person drawing from his true emotions.

It’s hard to imagine anyone else but Mintz-Plasse portraying McLovin, but Hill was apparently not a fan of the decision to cast him at first based on what went down during an audition where the actor showed off his improv skills at the expense of his more proven co-star:

HILL: Chris was really, really amazing off the bat. And I think he was really annoying to me at that time.

ROGEN: Jonah immediately hated him. He was like, “That was f—king with my rhythm. I couldn’t perform with that guy.”

APATOW: Jonah said, “I don’t like that guy. I don’t want him doing it.” And I said, “That’s exactly why we’re hiring him. It couldn’t be more perfect. The fact that it bothers you is exactly what we want.”

Thankfully, Hill was eventually able to put that ill will behind him and warm up to his foil—and the world is a better place because of it.