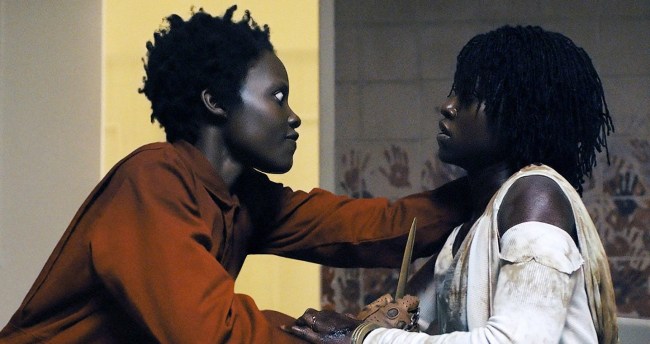 So, have you seen Jordan Peele’s second entry in the horror-flick genre, Us, yet?

If not, WHY ARE YOU READING THIS? You’re going to spoil everything!

Okay… that out of the way, if you HAVE seen Us then you know wild the ending of the movie was. Plus, if you are like so many others on the internet you have your own theories about what really went down.

Now Peele has already explained some of the more unexplainable features of the film, like what was up with the rabbits.

“On paper they’re adorable, lovable rabbits,” Peele explained in an interview. “Have you ever gotten close to a rabbit? You can tell in their eyes that they have a sociopath. If you put a rabbit brain in a human body, you have Michael Myers. They have no empathy.”

"Rabbits… they have the brain like a sociopath." @JordanPeele explains how nature's cuddly creatures are the most terrifying animals around. #UsMovie pic.twitter.com/94FYwPRjvF

Peele also told The Guardian, “They’re an animal of duality. They’re adorable but they terrify me at the same time. And they got those scissor-like ears that creep me out.”

But enough about the rabbits, let’s get back to that twist ending.

In a recent interview on Empire’s podcast, Peele tried to break it down for us.

“This movie’s about maybe the monster is you. It’s about us, looking at ourselves as individuals and as a group, Peele explained. “The protagonist in the movie is the surrogate for the audience, so it felt like at the end of the day, I wasn’t doing my core theme any justice if I wasn’t revealing that we have been the bad guy in this movie. We’ve been following the villain. I say ‘villain’ lightly because I think there are many experiences of the film, and I think a lot of people go through a question of what is good and evil? Does that even exist? Both characters are lovable and terrifying, based on the lives they’ve led they’ve just sort of inverted the paths.”

As for THAT moment at the very end when Adelaide’s son Jason pulls his creepy mask down over his face, Peele had this to say…

“Adelaide and Jason sharing that moment at the end. I’m purposefully leaving it a bit vague as to what exactly he knows or how far he’s come in figuring out what, if anything, he’s figured out,” he explained. “I think the little smile she gives him is a lot of things. I think it’s a connection to the evil smile she once had as a little girl, but also a sort of understanding that her family unit was stronger from this experience.”

Listen to the entire spoiler-filled interview with Peele below where he discusses the ending to Us, the secrets of the Tethered, The Underpass, and more, below… (oh yeah, also, rabbits).