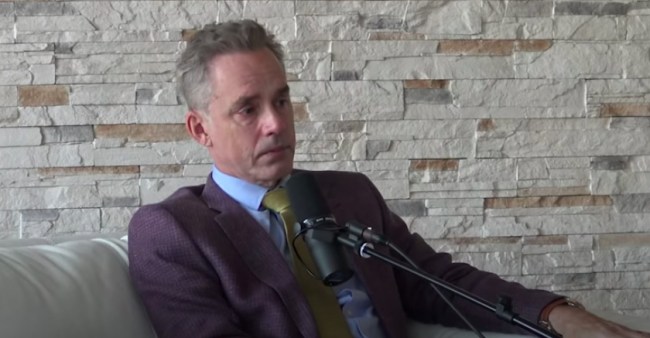 In April 2019, the professor at the University of Toronto began his descent into the shadows after becoming physically dependent on benzodiazepines brought on by his wife’s terminal cancer diagnosis.

While Peterson had been prescribed the drug for years to alleviate constant anxiety in the wake of a severe autoimmune reaction to food, attempts to ween off the drug resulted in a year of “absolute hell,” a hell that began with relatively manageable symptoms like weakness on his left side and a feeling of detachment from people around him to weeks without sleep and delusions that a Floridian gang was determined to kill him.

“It’s no overstatement to say that for me the consequences of benzodiazepine withdrawal were worse than death.”

The 58-year-old recently sat down with his daughter Mikhaila, a vital person in his quest for recovery, about his horrifying year.

I also developed this condition called akathisia, and the best way I can describe that is it was like being jabbed with a cattle prod, something electric or something sharp, nonstop for all the hours I was awake. I couldn’t sit, or lay down, or stop moving.”

Peterson then checked himself into a clinic on the eastern seaboard that claimed they could do a rapid benzo detox, which he claimed was a “complete bloody lie,” and came out of the clinic significantly worse than he went in.

(At the 17:30 mark, Peterson gets emotional after saying his family and friends were the only reason he survived the “intolerably dreadful” experience.)

After another unsuccessful hospital stay in Toronto, Mikhaila and her husband Andre found a treatment center outside of Moscow, Russia to try a treatment that used a heavy sedating agent that made him unconscious for nine days, all while suffering through pneumonia in both lungs.

“When I woke up, I was first catatonic and then delirious.”

“I remember the delirium that lasted a whole day and consisted of a sort of dream-like hallucination that I had been kidnapped by people, oddly enough who lived in Florida, and they were very rural, back woods people, and the leader of this little gang was going to kill me because he wanted to impress his girlfriend.”

Peterson then says that when he woke up, the akathisia had subsided, but he couldn’t see straight, remember how to type on a keyboard, button his shirt, or even lay down in bed.

Peterson then addressed the irony of a clinical psychologist who wrote a self-help book spiraling to depths very few men have plummeted to.

“Why the hell didn’t I see this coming? Why should people take anything I say seriously because of that?”

“I guess what I would say is, if you’re going to wait to learn from people who don’t make mistakes or don’t have tragedy enter their lives, you’re going to spend a long time waiting to learn something.”

“And the second thing I would say is, in my lectures and my writings, I have never suggested that I was anything other than one of the people who also needed to learn these lessons. So I included myself in the population of people who needed some moral improvement.”

While Peterson himself admits that he’s not out of the woods (he’s been feeling good and clear for just two weeks), mark 53:25 in the discussion proves that the psychologist knows he has things worth fighting for. Tissues recommended.