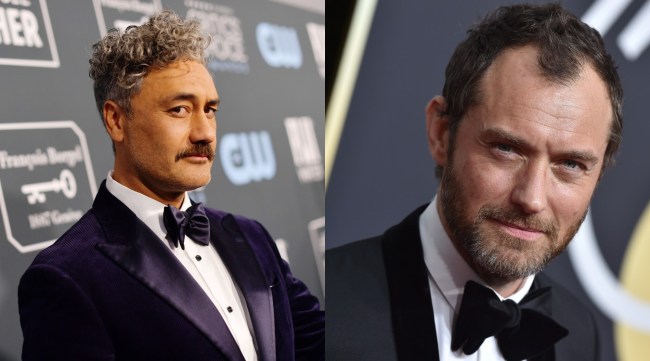 There are few names in Hollywood as in-demand as Oscar-winner Taika Waititi.

After breathing new life into the Thor franchise a few years ago with Thor: Ragnarok, Waititi has become one of the most sought-after talents in Hollywood, especially after he brought home the Academy Award for Best Adapted Screenplay for his work on Jojo Rabbit.

Waititi certainly has a busy upcoming slate: he recently wrapped production on his next film — Next Goal Wins starring Michael Fassbender — and will begin production on Thor: Love and Thunder later this year. Furthermore, there were reports earlier this year that Disney approached him about directing a Star Wars movie. You get the picture — people are trying to hire this dude.

And according to reports, Showtime has succeeded at exactly that, as the network has nabbed the Jude Law-starring series The Auteur.

Per Showtime, The Auteur is a gonzo horror-comedy, a twisted romance, and a glamorous, high wire act of biting satire. Law will play a film producer who, desperate to make a great horror movie following a massive flop, accidentally traps his production on a backlot with a serial killer.

Waititi, who’s no stranger to horror-comedies thanks to What We Do in the Shadows, will direct the half-hour series as well as co-write the script with Peter Warren (Ghost Team). Showtime has ordered multiple scripts and will produce alongside Legendary, with Endeavor Content serving as the studio.

“The Auteur unites the wildly imaginative filmmaker Taika Waititi and the barbed wit of Peter Warren with the undeniable Jude Law in a bloody love letter to the movies that will make you simultaneously die laughing and want to run for your life,” said Amy Israel, executive VP of scripted programming at Showtime. [via Collider]

At this time, The Auteur has no official release date.