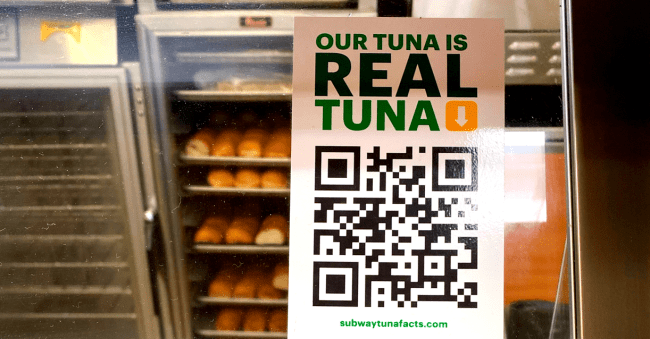 In the seemingly endless saga of whether Subway’s tuna is actually real tuna, or even fish, a judge in California has ruled that Subway can sued over the restaurant’s claims that the tuna in their sandwiches is “100% real.”

The suit, filed in U.S. District Court for the Northern District of California by plaintiffs Karen Dhanowa and Nilima Amin of Alameda County, claimed that of the 20 tuna samples collected from 20 different Subway restaurants in southern California 19 of them contained “no detectable tuna DNA sequences whatsoever.” That version of the lawsuit was eventually dismissed.

Subway has continuously claimed that their tuna is “100% real wild caught tuna,” yet the test results compiled by the Barber Lab at UCLA’s Department of Ecology and Evolutionary Biology said otherwise.

The restaurant chain has even gone so far as to created an entire website to share the “truth” about whether their tuna is real.

Now, U.S. District Judge Jon Tigar has ruled that Subway can, in fact, be sued by plaintiff Nilima Amin for allegedly deceiving customers about its tuna products including salads, sandwiches and wraps.

“Although it is possible that Subway’s explanations are the correct ones, it is also possible that these allegations refer to ingredients that a reasonable consumer would not reasonably expect to find in a tuna product,” he stated in his ruling.

The judge did dismiss plaintiff Karen Dhanowa from the lawsuit as well as Amin’s argument that “reasonable consumers” would expect only tuna and nothing else to appear in Subway’s tuna’s products, such as mayonnaise and bread.

The plaintiff Nilima Amin has claimed to have ordered Subway tuna products more than 100 times from 2013 to 2019 under the assumption that she was eating “only tuna.”

“Defendants do not take sufficient measures to control or prevent the known risks of adulteration to its tuna products,” the lawsuit stated. “On the contrary, they actively perpetuate actions and steps that encourage mixing or allowing non-tuna ingredients to make their way into the tuna products.”

Subway responded to the ruling with a statement reiterating that it serves “100% tuna” and that the company is “confident that Subway will prevail when the court has an opportunity to consider all the evidence.”

The restaurant chain also claimed that anything that is not tuna in one of its tuna products may have been the result of cross-contamination by an employee who prepared the item.