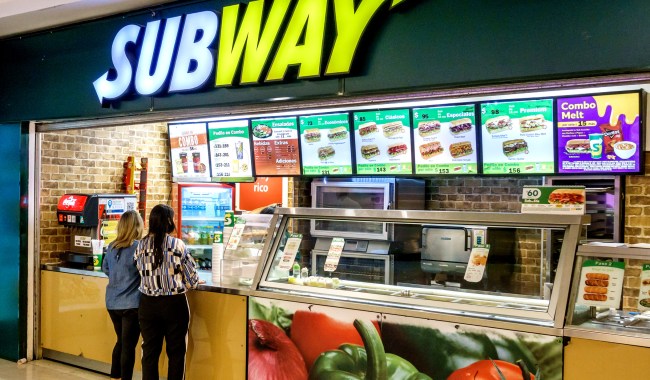 I will let you decide for yourself which one of those situations this lawsuit against Subway restaurants falls under.

The lawsuit, filed in U.S. District Court for the Northern District of California by Karen Dhanowa and Nilima Amin of Alameda County, seeks damages from Subway for fraud, intentional misrepresentation, unjust enrichment and other claims under federal and state laws, reports the Washington Post.

Why are they doing this? Because, according to their lawsuit, Subway’s tuna is “made from anything but tuna.”

Based on independent lab tests of “multiple samples” taken from Subway locations in California, the “tuna” is “a mixture of various concoctions that do not constitute tuna, yet have been blended together by defendants to imitate the appearance of tuna,” according to the complaint. Shalini Dogra, one of the attorneys for the plaintiffs, declined to say exactly what ingredients the lab tests revealed.

“We found that the ingredients were not tuna and not fish,” the attorney said in an email to the Washington Post.

Dhanowa and Amin claim they “were tricked into buying food items that wholly lacked the ingredients they reasonably thought they were purchasing.”

Related: Man Files Lawsuit Over ‘Hawaiian Rolls’ Because They Are Not Made In Hawaii

Of course, Subway, who has already had to deal with a lawsuit that claimed their footlong sandwiches were not, in fact, 12 inches long, disputes their claims, adding that not only is their tuna the real deal, it’s also wild-caught.

“Tuna is one of our most popular sandwiches. Our restaurants receive pure tuna, mix it with mayonnaise and serve on a freshly made sandwich to our guests,” Katia Noll, senior director for global food safety and quality at Subway, said in a statement to the Post.

Dhanowa and Amin are seeking compensatory and punitive damages as well as attorneys’ fees, while their lawyers seek to get the lawsuit certified as a class action.

So is Subway’s tuna actually real tuna? That is now a mystery for the courts to decide.

An even bigger mystery to me is why anyone would ever want to eat tuna in the first place. Especially after the story that went vial back in 2015 about a creepy little creature someone discovered chilling out in their can of tuna.