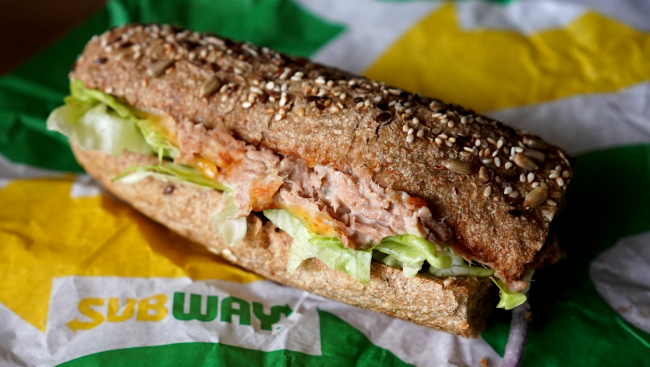 Back in January, it was reported that a class-action lawsuit had been filed in U.S. District Court for the Northern District of California by Karen Dhanowa and Nilima Amin of Alameda County, seeking damages from Subway for fraud, intentional misrepresentation, unjust enrichment and other claims because they claimed the tuna being used in Subway’s sandwiches is “made from anything but tuna.”

They claimed to have have had tests completed at independent lab tests using “multiple samples” taken from Subway. Their attorney claimed the tests showed “the ingredients were not tuna and not fish.”

Subway, naturally, denied the accusations and stated that their “restaurants receive pure tuna, mix it with mayonnaise and serve on a freshly made sandwich to our guests.”

In February, the TV show Inside Edition sent samples of the fast food franchise’s tuna to Florida-based Applied Food Technologies to test it and see what’s in it.

The lab results came back and it confirmed that Subway’s tuna is, in fact, actually tuna.

Their tests couldn’t determine where the tuna originated from or if it is, as Subway claims, “wild-caught,” but the mystery surrounding Subway’s tuna has persisted.

So, this week, none other than the New York Times has decided to get involved.

“There simply is no truth to the allegations in the complaint that was filed in California,” a spokeswoman wrote in an email to the Times. “Subway delivers 100 percent cooked tuna to its restaurants, which is mixed with mayonnaise and used in freshly made sandwiches, wraps and salads that are served to and enjoyed by our guests.”

Not satisfied with Subway’s response, the Times sent a sampling of the tuna to a commercial food testing lab which specializes in testing fish.

Subway claims that the tuna used in its sandwiches is skipjack and yellowfin tuna. The class-action lawsuit filed against the restaurant chain recently amended their claim from saying the tuna is fake to saying it isn’t those particular species of tuna.

However, when the Times’ lab test results came back, it read, “No amplifiable tuna DNA was present in the sample and so we obtained no amplification products from the DNA. Therefore, we cannot identify the species.”

A spokesman for the lab told the Times, “There’s two conclusions. One, it’s so heavily processed that whatever we could pull out, we couldn’t make an identification. Or we got some and there’s just nothing there that’s tuna.”

Of note, once tuna has been cooked identifying its DNA becomes almost impossible.

So is Subway’s tuna real? After numerous lab tests, we still don’t have any 100 percent definitive proof. Should that be cause for concern?

On the plus side for Subway, at least this little guy wasn’t discovered in any of the tuna samples sent to the labs.